Val Browne has a “natural gift” for wood turning

When Val Browne’s beloved wife Mary passed away suddenly in July last year he felt little in life was worth living for.

Mary Browne was only 55 when she discovered a pain in her side that turned out to be liver cancer. She was told the cancer had permeated 80 per cent of her body and she had just days to live.

“At her funeral people kept asking me how she died so fast. They asked me over and over. I just couldn’t take it any more,” Val Browne (69) tells the Western People.

Val didn’t leave the house for three weeks, and the stress of losing his wife of more than 30 years caused all of his hair to fall out.

Eventually, a family friend brought him to the Ballina Men’s Shed.

“When I saw the wood I knew this was the place for me,” Val says.

He kept his head down at first, finding solace in the shed’s wood-turning machine, but gradually he emerged from his shell and bonded with the men around him.

Meanwhile, Val was adding a new dimension to the shed, according to fellow member Seamie Rice. “He turned the whole place around because he got all the woodturning going,” Mr Rice says.

Vincent McMahon adds that it is incredible to watch Val work, as he has a rare “natural gift” for the trade.

Since joining Val has produced an assortment of wooden objects, including lamps, stools, pens and clocks.

“They would make great Christmas presents,” he says with a twinkle in his eye.

But keeping his spirits up takes work, and he still experiences moments of deep sadness, he says. The difference now is he can ask for help. 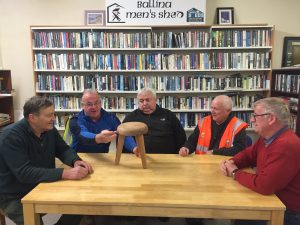 “It is friends and the Ballina Men’s Shed that saved me,” he says.

“I still find the evenings very lonely. When I sit at home I think that she will open the door and ask if I want a cup of tea, but that is never going to happen.”

He has some “wonderful” friends, family, and neighbours who call to him three times a week.

“I used to walk alone and I would think about the sad things in life. I find if I have someone to walk with me that’s the best tonic.”

The Ballina Men’s Shed rescued Val from another disaster.

When the heart health charity Croí visited the shed, Val, who walks four miles each day, saw no need to participate in a blood-pressure and cholesterol check. He says he only co-operated to keep his friend Seamie Rice quiet.

But his results were not good. His blood pressure was “through the roof” and the nurse described him as a “ticking time bomb”.

Now, with a course of medication, he is in good health. He expressed his heartfelt thanks to his friends, fellow shed members, and the HSE workers who helped him through his dark days.

November is men’s mental health month, a time when men are encouraged to talk about their feelings and their health.

Val says he will never get over the loss of his wife, but he has learnt to live with the pain.

“Life is a hard struggle each day, but my hair is growing again and I’m getting back to myself.”