Duffy pays tribute to his ‘warriors’ in cup success

The Ballina Town players and their supporters were massing at the foot of the Milebush stand in anticipation of their lifting the Super Cup trophy for the third successive season when Town manager Mick Duffy took a moment to pause and reflect on the cup final just finished. 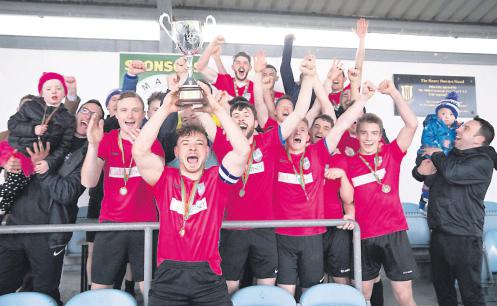 It hadn’t been a game for the purists, with the two defences dominating, and chances at a serious premium for both sets of forwards — but, as Duffy outlined, the resilience Town showed to keep out a dogged Manulla side and find the decisive goals when they needed them meant that this victory would rank amongst the sweetest of his trophy-laden three years at the helm.

“It’s just proof of the warriors we have,” said Duffy. “Everyone, the whole squad, it’s a massive force that we’ve built up over the last few years and I’m so proud of them.

“To stay in the game … we knew it was going to be a battle.

“Fair play to Manulla, they made a good game of it. But we had the quality there, the likes of Benny Lavelle coming off the bench and Dylan Edwards.

“But the warriors are everywhere, Niall Casey, Derick Tansey — I don’t want to go naming names, because they were all immense. I’m so proud of them.”

Ultimately, it was Town’s depth of quality that got them over the line. When it became apparent around the hour mark that Manulla were standing up to everything Town could throw at them, Duffy was able to turn to his bench and call upon players like Lavelle and Edwards.

Few, if any, other teams in Mayo could afford to start a cup final with individuals of their talents on the sideline and Duffy agreed when it was put to him that the injection of attacking quality had been the decisive factor in the end. Edwards set up the opened for Lavelle, who made the game safe with his second late on off a brilliant assist from Town captain Jamie Cawley.

“It told eventually,” nodded the manager. “It took us a while to get going but they’re quality players. Dylan Edwards is an exceptional player and so is Benny.

“It took them a while to get into it but when they did, they just had that quality.

“I told the lads that we needed to see that in extra-time, and look at Benny Lavelle, what a superb showing. Jamie Cawley swung in a beautiful ball there and he could only see out of one eye. It was unbelievable.

“We had to weather the storm and keep going and that’s what we did,” he continued.

News broke later on Sunday night that Duffy could be planning to call time on his tenure in charge of the Belleek outfit and, if so, this will have been the perfect way to sign off.

In his three years in the role, he was able to bring Town back to the Super League summit, ending a four of four straight Westport United league titles while also claiming those three Super Cup wins in succession.