After the guts of a year on the sideline, Kenny Feeney is back doing what comes naturally to him: scoring points for the Tooreen hurlers. Feeney missed the latter half of the 2018 season and the vast majority of Mayo’s 2019 campaign with a torn cruciate ligament and it is only in the past couple of months, as Tooreen have progressed to another Connacht club final, that the full-forward is back to his old self. 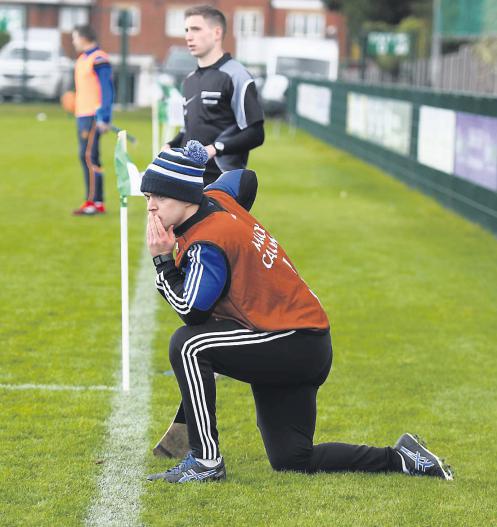 Kenny Feeney watches play from the sideline while injured last year. The full-forward will be back in the middle of the action when Tooreen take on Kinvara in this year’s final on Sunday.
Fotoware

Feeney sustained the injury in June of 2018 while playing for Mayo in their Christy Ring relegation play-off against Roscommon. He watched from the wings as Tooreen retained the Tyrell Cup and advanced to a Connacht final to defend the crown he helped them win for the first time in 2017, only to fall short of Galway’s Oranmore-Maree.

He was still in the recovery process for Mayo’s National League campaign and only saw game-time off the bench in their last two Nicky Rackard Cup games against Louth and Sligo, a campaign that ultimately ended in disappointment for Derek Walsh’s team.

But the important thing for Feeney, from a personal point of view, was that he was back on a hurling pitch. Speaking this week ahead of Tooreen’s Connacht final against Kinvara on Sunday, he said it was a long and sometimes difficult recovery process.

“With the ACL it’s not straightforward, you get little setbacks. I expected to be back a little bit sooner but with one thing and another I had to wait nearly a year to get back on the field properly,” he said.

“It’s frustrating. It’s a big change to the system, when you’re used to training five or six nights a week. You start off doing your own little bits and slowly work your way back to getting back out on the pitch. Some of the evenings were difficult but everyone has their ups and downs in life and an ACL isn’t the be-all and end-all in the grand scheme of things.

“It was boring enough at times. But I was lucky enough; I had some good people around me. I had lads on to me to go to the gym with them and that sort of thing so when you have people encouraging you and helping you along it makes a big difference.”

He returned in time to help Tooreen to their third county title in a row, secured with a final win over Castlebar Mitchels last month. He admits that it took some time to rediscover the old rhythms after his lengthy lay-off.

“I don’t know if I’m feeling 100 per cent yet!” he said with a laugh. “But it’s good to be back out there. It takes a while to get your touch back and that but it’s nice to be back and to help the lads as best I can.” Feeney, who is running his family’s Ava Maria Nursing Home in Tooreen, said it was a welcome change to play that county final against Mitchels after seven straight years of Tooreen-Ballyhaunis deciders.

“It was a new challenge for us because we’re so used to playing Ballyhaunis. But Mitchels are putting in serious work at club level, behind the scenes. You saw it there in the final; they gave us a real fright. If we weren’t at the races that day we’d have been blown out of the water. They were physical and they hungry and they gave us a kick in the arse that we probably needed,” he offered.

“For the Mayo team itself, the more players we have coming from as many different clubs as possible, the better. Westport and Castlebar are putting in serious work at underage. We played Westport over there this year and we got nothing easy off them. They’re coming with a nice young squad.

“It’s great for Mayo hurling to see two teams progressing just as much as Tooreen and Ballyhaunis. They might not be getting the plaudits yet but they’re not far off.”

Tooreen went on to overcome Roscommon’s Four Roads and Robert Emmets of London in the Connacht quarter and semi-finals to qualify for a third final in as many years. They hit 29 and 30 points respectively in those games but as Feeney outlines, they were two very different kinds of wins.

“Against Four Roads everything just seemed to fall into place for us,” he said. “There are days you go out and try those shots and they all go wide but that day everything we hit went over and we looked like a super unit. We have a good bond as a team and as a 15 and when you have that bond with lads it can just transfer over onto the pitch.

“Against Four Roads it clicked and then the last day against Robert Emmets we had to dig a little deeper, but I’d still like to think that we worked well as a unit. We stuck to the process and kept doing what we set our stall out to do. We knew if we kept tagging on the points that something would happen.

“We relied on our fitness and our hurling ability and we knew that if we were there or thereabouts with five minutes to go, we wouldn’t be far off the result we needed,” continued Feeney, who was named man-of-the-match after that extra-time win.

The victory sent Tooreen into this Sunday’s final against Galway intermediate champions Kinvara, who overcame Kilconieron in their county final last weekend courtesy of ten points from their star man, Galway’s All-Ireland winner Conor Whelan. Tooreen have the experience of two Connacht finals in the last two years to draw upon but Feeney says that won’t count for much come Sunday afternoon.

“It’s still a big task,” he said. “We’ve been there for the last few years but that doesn’t mean anything; you’re playing the Galway champions. The standard of Galway hurling compared to the standard of Mayo hurling is superior. We’re hopeful that the work we’ve been doing over the last number of years will help us get there, but at the same time, people have to realise that we’re playing Galway inter-county hurlers. These lads are elite hurlers and they’re playing at that level week-in, week-out.

“Conor Whelan is obviously a man we’ll have to watch but at the same time, Shane Boland got 14 points for us last weekend: are they going to worrying about him? Fergal (Boland) is chipping in with seven or eight points a game. They’re going to have to worry about us a little too. Or maybe they won’t be too worried about us, which might play into our favour.”