Decision due on Killala Power Plant in the coming weeks

The Commission for Regulation of Utilities (CRU) is due to make a decision in the coming weeks on a certificate for the proposed Mayo Power Ltd biomass power plant in Killala. 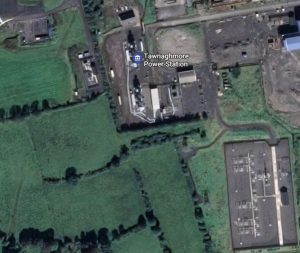 The Mayo Power plant site at Tawnaghmore near Killala.

Mayo Power Ltd has questioned the energy regulator’s decision to reduce a previously issued energy efficiency certification of 100% to 17% in its review of the project.

There had been plans to build a wood-chip burning electricity generating station at the former Asahi site in Killala at a cost of up to €200m but work ceased in July 2016 as the project ran into a funding shortage.

It was envisaged that the power plant would, in addition to creating employment, supply power to an estimated 70,000 homes in the region.

Its representatives said the original application made in 2012 was different from that made in 2018 by the new owners, Mayo Power Ltd.

The CRU previously stated that the the 2018 application was for a more expensive heat and a less efficient process and that is why it fell below the requirements for a 100% certificate.

Paul McGowan, chair of the CRU, told Mayo County Council that the energy regulator is bound by stringent regulations and cannot exercise discretion.

Councillors were advised that the 2018 business plan for the project was different to that which received the 100% energy efficiency certification in 2012.

The 2012 application intended to import biomass from the US while the 2018 application would have seen Mayo Power Ltd source local products at a higher price.

The CRU also said that the drying process proposed was less efficient than that contained in the 2012 application.

A decision on Mayo Power Ltd’s latest application for high efficiency certification is due from the CRU in a matter of weeks.