The Christmas season will be officially launched in Ballina on Sunday, November 24 next. 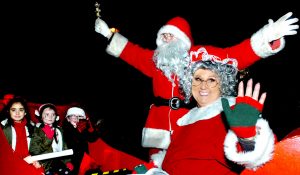 Local children shared a sleigh ride with Santa and Mrs Claus when they visited Ballina last year for the official switch on of the Christmas lights. Picture Henry Wills.

A capacity crowd is expected in the town centre that afternoon to witness the official turning on of the Christmas lights by Santa Claus himself.

The local Jackie Clarke Collection will be at the centre of the festivities and has planned a whole host of fun events to mark Santa’s arrival, commencing at 3pm.

Highlights will include a meet and greet with Mrs Claus at the bandstand in the collection’s beautiful walled, heritage garden; festive crafts with the local Girl Guides troop; Christmas scenes in the Clarke Collection’s cinema; musical entertainment by the Foxford Brass and Reed Band; performances by Atlantic Rhythm; members of The Core and the Men’s Shed Choir; a Christmas-themed treasure hunt; the Big Blue Bus; face painting and a cake bake sale in association with Culleens National School.

So mark the date in your diaries. It promises to be a magical day for all of the family and just one of many attractions planned for the coming weeks to entertain everyone that chooses to shop in beautiful Ballina this Christmas.