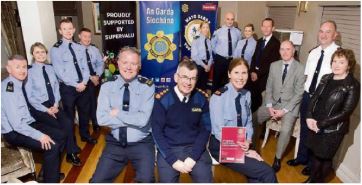 The Commissioner was at Breaffy House to launch the awards which showcase the positive contribution young people are making in their communities.

The event has also proven successful in increasing positive engagement between An Garda Síochána and young people.

The Mayo winners will go on to take part in the national awards.

“Last year was a resounding success. Over 450 people attended the awards to celebrate over 100 nominated young people from all over Mayo,” said Inspector Mandy Gaynor from Ballina Garda Station, who will chair the judging panel for the awards.

“Sarah was told at a very young age that she would never be able to drive, she had a great interest in cars and she went on to become the first visually impaired rally driver navigator. That was amazing,” said Insp Gaynor.

“The group award for community safety was a group of kids from a school in Moyne College in Ballina and they won [with] the road safety video with a short clip about the dangers of wearing headphones while walking along the street. As well as those winners, there were kids who are involved in the Order of Malta, young people who brought disabled and elderly people off to Lourdes, there were groups involved in the Belarus orphanage. I was just really humbled and really overwhelmed. The absolute calibre of young people in Mayo really is astonishing,” she added.

Young people aged between 13 and 21 are eligible for the awards and they can be nominated by anyone who feels that their endeavours have benefited their local community.

The awards take place on January 18 in the Great National Hotel, Ballina.

The closing date for entries is December 16. Nomination forms can be accessed via this link: https://www.garda.ie/!FHQRZG

Completed forms can be sent to [email protected] or can be posted to Ballina Garda Station for the attention of Inspector Gaynor.