Nobody should be fooled by cheap swipe at the media

For every action, there is an equal and opposite reaction, reckoned Sir Isaac Newton. Then along came Mayo County Board. The Third Law is no more. 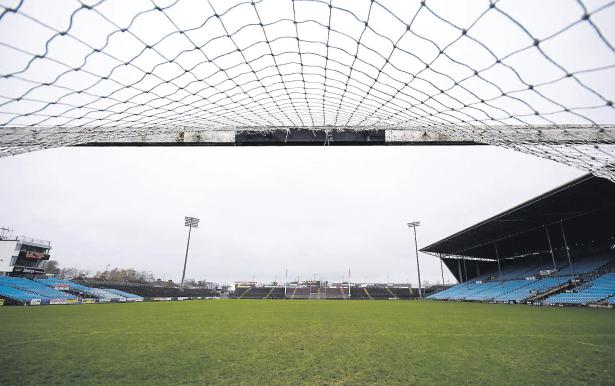 It’s matters off the field in MacHale Park that have been dominating the headlines as much as what has been happening on it. –
Mandatory Credit ©INPHO/Evan Logan
Fotoware

Me being of such inferiorintelligence, Mike, you might enlighten me. Please. Pretty please.

What was it, Mr Chairman? Why the red card? Why, last Monday, did you instigate the decision to exclude the media from all future meetings of Mayo County Board? On what grounds, Kevin, will you decline my entry when next the Board convenes? Dermot, exactly what action caused the reaction?

I ask, Mike, on the basis that for practically 20 years I have been reporting the minute details of Mayo GAA meetings, and not once have you, nor any other officer or delegate, alleged my reporting of those meetings to be inaccurate. Never (unlike the seven Mayo clubs who last week issued statements to counter the one released by your Board subsequent to last Monday’s meeting) has someone contacted me to take issue with my interpretation of the discussions as they unfolded. But now I’m not to be trusted?

As officers, you seem to have hit a bit of a sticky patch of late. Whose fault that is, is a matter of opinion (Just to put it out there, I’d have some sympathy for aspects of the Board’s predicament, like how to appease a serious sponsor who hasn’t a right to some of the control he seeks). Nowhere, however, had I heard it said, nor had I even considered, that the media – as this ban could be perceived as suggesting – was somehow to blame for the breakdown in relations that exists between your Board and its benefactor, Tim O’Leary. That rot, documents have shown, had set in long before the details of the dispute ever entered the public sphere. It’s a classic case of shoot the messenger.

The reality – and Mayo GAA officials would do well to be reminded of this – is that the media coverage of their affairs of late has actually been quite moderate, given some of the unpublished stories and correspondence that the warring factions have been circulating behind the scenes. Let’s just say, a donkey isn’t the only four-legged animal stuck in the row; whether that beast is let out of its pen only time will tell.

It’s no secret that an audio recording of last Monday’s meeting has been circulating and it’s an understatement to say that a serious question exists (should we be surprised?) about the validity of how the agreement to, as it was put, “eliminate” the media, was reached.

It’s a cowardly act, officers, that of the Board to refuse the local newspaper to its monthly meetings, cowardly not only because it has been done with questionable reason but because it screams that the Board wishes for its business to be hidden from public view.

One delegate was heard to speak in favour of the media’s exclusion on the grounds that our presence could deter delegates from speaking freely. I’d hope those delegates are of firmer conviction than their colleague gives them credit for. In fact, I’d go further and suggest that any delegate who isn’t keen to have their opinion heard loud and clear has probably been elected to the wrong job by their club.

Did you, Mike, read my colleague Mark Higgins’ account of the Board’s last monthly meeting? He reported about directions from Croke Park regards underage competition structures and on the grants awarded to a dozen Mayo clubs and on the progress of the proposed indoor playing facility at the Connacht GAA Centre of Excellence and on the viewing statistics of Mayo GAA TV and on the reasons for the absence of Mayo officials at the last Special GAA Congress and on the treasurer’s response to a query about the Board’s credit card expenditure. I didn’t see any of this information forthcoming from Mayo County Board’s public relations department. But maybe it’s the Board’s opinion that the ordinary Mayo supporter, without whose support our club and county teams would not function, nor have a facility so grand as MacHale Park to play their games in, is not deserving of such insight.

Of course, Mark did also report on the unseemly spat between yourselves and Tim O’Leary and the Mayo GAA International Supporters Foundation, but Mike, he wrote nothing only what passed the lips of the officials and delegates who spoke on the night. No opinion did he offer, just the facts. So again I’ll ask: what is it the local press has done to warrant such a dictatorial decision from you and your Board?

Indeed one thing that seems to have been conveniently overlooked is the worth of that same local press to Mayo GAA. As legendary Mayo player and minor manager JP Kean observed last week in the wake of the ban:

“The media play a huge role in promoting our games and culture. They send reporters in all types of weather, to club under-12 games, first year colleges matches, Junior ‘B’ and ‘C’ and ‘D’ club matches. This is a daily support of our games that runs all year round. How can these blinkered people ban the media who give such support to what the Board should be promoting? Even ‘the most powerful man in the world’ has failed to silence the media, but we have people in charge who appear to have more power and who, sadly, are prepared to sacrifice the incredible benefits that the media brings, to suit their own self serving secretive ends.”

Couldn’t have put it better JP.

Of course, none of our coverage of the above bread and butter activities of the GAA would or should absolve us if we fall short of expected standards in our reporting of Mayo GAA’s off-field affairs. But until you Mike, or the Board, can point me towards such failings, I remain utterly confused as to your sledgehammer-to-crack-a-nut approach.

Of course, it’s a defence mechanism of County Board officials right across the country, whenever they’re under fire, to refer and remind us all of their volunteer status, as though it’s a valid excuse for clumsiness. All that does is insult the volunteers who would know better than to put Shoe the Donkey on a MacHale Park playlist.

My point is, is it the individual or the information you want to eliminate?

Executive officers, and your deputies, whatever your woes are at present, blaming the media is up there with the dog ate your homework. No one believes you.