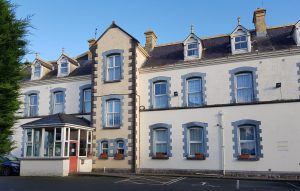 The Old Convent in Ballyhaunis is the fifth-largest direct provision centre in Ireland, holding up to 245 people.

When Agyueiwaa Owusu and her three children entered the direct provision centre in Ballyhaunis, she thought they would stay there for a maximum of two years. Little did she know that eight years on they would still be there, as the centre’s longest-serving residents, their lives left in limbo while the Department of Justice and Equality decides their fate.

Agyueiwaa Owusu is one of 116 applicants waiting over seven years in the system, as of mid-October. Her youngest son, aged two when he entered, does not remember a life outside of direct provision. He often asks her: “Mama, why are these people leaving before us. What is wrong with our family?”

She says she just doesn’t have any answers to give him.

Direct provision has returned to public attention in recent weeks with two new centres announced in rural Irish communities, while a second Mayo centre was announced for Achill Island last week to a mixed reception from locals.

The reaction in Achill and other communities has been one of anger at being kept out of the loop by the Department of Justice. Achill locals were told that a centre was due to open less than two weeks ahead of the arrival of the first group of asylum seekers.

But while the communities feel they are left in the dark those inside the centres are just as lost, says Owusu. Her application for asylum has been left in the hands of the High Court for the last three years, having been rejected three times.

“Once your case is in the High Court they forget about you. They don’t think you are there,” she tells the Western People.

Owusu wishes her children could grow up with better lives in Ireland than they could have had in Africa.

“But this is not much of a life,” she says of their existence in the Ballyhaunis centre.

“My children are crying because they want to be normal children. The system encourages children to give up on their lives. My son wants to give up football because he cannot see any future for himself,” she adds.

Born in Ghana, the Owusus arrived in Dublin Airport eight years ago, where they were taken in for questioning. It was then that she began her application for international protection.

“People say to me: ‘Ah, in your country there is no war’, but it is not just war that is the problem. Even though you do not see bullets and guns in my country, that doesn’t mean I don’t have problems.”

For Owusu, the very act of uprooting the livelihood of her family and their willingness to endure eight years in direct provision should prove to authorities they are in a desperate situation.

“Why would I put my life inside a room if there were no problems there? I have three boys; if everything was alright, why would I run away with them?” she asks.

“I would not come here and spend this time in direct provision if there was something for us at home.”

Her eldest son has spent half his life in the centre. His football coaches tell her he has a rare gift for the game, but he lacks motivation. She wonders why should he practise when his life is so restricted.

Meanwhile, Owusu and her family remain at the centre, where families stay in small on-site houses. She cooks endlessly to pass the time.

“I have maybe 10 cups of tea in the morning, not because I want them but because I am bored.

“I wanted to come to use these hands, to work and provide for my children.”

In Ghana, she was a trader and a hair-stylist. A mother who cannot provide and look after her children is a “sad, sad thing”, she adds.

After eight years in the system, Owusu has no option but continue to sit and wait.

“How can I go somewhere else and waste my time after all this? And my children are growing old.

“If I get deported, where do I go? I have nothing back in Africa. My children don’t know anything about Africa.”

She imagines a day that might never come; the day she is told she and her three boys have the right to remain in Ireland outside of direct provision.

“I would tell somebody to pour cold water and pinch me because it would seem like a dream to me.”

Owusu says the Irish system is relentlessly punishing, and yet she struggles to figure out what terrible crime she has committed.

“If you kill someone you get put in prison, but I didn’t kill anyone. So why am I still in prison?”