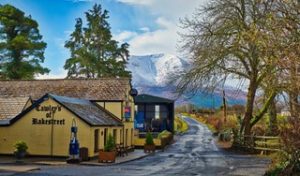 Nephin Mountain rising from behind Cawley’s of Rakestreet in Crossmolina as featured in the Nephin 2020 calendar. The pictures of the area were taken by Mike Kinsella and Martyn Harris.

The beauty of Nephin is showcased in a 2020 calendar which has been organised and designed by locals of Lahardane and Bofeena.

The newly-formed Tidy Town committee were keen to make use of the beautiful landscape on which their town sits, according to committee member Mary Gibbons.

She said she knew the calendar would be popular with locals and former locals who appreciate the “beautiful setting”.

Although the calendar had only gone on sale online two days prior to her speaking with the Western People, she said purchases had already been made by people as far afield as London and America.

“We thought it might be popular, but we cannot believe how well it has done in the past few days,” she said.

“We were sure there would be a lot of local people abroad who would buy it as it shows scenes from home, memories from home,” she added.

The tidy town committee was established just a few months ago, but its members are brimming with enthusiasm and excitement, having already painted all of the village’s peeling walls, held a car wash and currently trying to arrange flower planter boxes for “We are seeing that we can do a lot more for the town and that really we should have done a lot more before now,” she said.

As part of the local Shine a Light campaign, community members are encouraged to buy a bulb for someone who has passed away or moved from the area. The tributes will illuminate 42 trees in the village from December 8th in a lighting and carroll ceremony.

The group does not expect to make a profit from sales of the calendars or bulbs, as Ms Gibbons stressed they “have never done anything like this before”. However, any money made will be used by the tidy town committee to further their work in the area.