News of the death of Irish broadcasting legend, Gay Byrne, has impacted nearly every soul in the country. 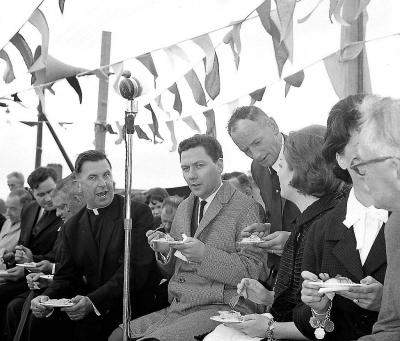 A household name for decades by virtue of his brilliance as a presenter in the radio and television studio, people throughout Mayo will undoubtedly have endless anecdotes to tell over the coming days of their encounters with and experiences of the famous Late Late Show host.

Here, the Western People adds to those recollections with a look back at the time Gay and his then fiancee, Kathleen Watkins, visited Ballina in 1964.

The young couple were afforded the royal treatment when they came to the north Mayo capital so that Gay could officiate at the opening of the inaugural Moy Festival.

Confirmation of his attendance made the front page on Saturday, June 6 of that year.

The exciting special guest had been revealed by festival chairperson, Mr Benny Walkin (Snr), at a festival committee meeting earlier that week.

It was also hinted that another Irish TV star, Eamon Andrews, might attend the inaugural festival that ultimately became Ballina Salmon Festival and has continued nearly every year since for more than 50 years.

Gay Byrne’s attendance had been secured thanks to the fact that his brother, Al Byrne, had been the Guinness representative in the Ballina area for several years prior to that.

The late Brian Lenihan, who was then parliamentary secretary to the Minister for Lands, was also invited as a guest.

The Western People report revealed that the celebrities would be afforded the VIP treatment while in Ballina when their duties would include selecting the Queen of the Festival.

They would also get to attend the dance in the festival marquee at the rear of the Old Royal Hotel in the Market Square.

The article also states that the “pressmen” would be accommodated during their stay without charge in the Imperial and Downhill Hotels.

Gay Byrne was also associated with the Castlebar Song Contest in its early years.

He resumed his association with Ballina in later life when he served as chairperson of the Road Safety Authority for 8 years in the early 2000s.

Its head office is based in Ballina and Gay once told a colleague that while people would remember him for his broadcasting his legacy would be his road safety work.

Mayo school top of the class for water conservation efforts