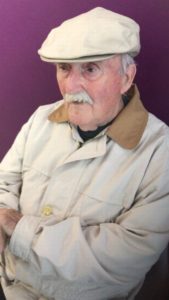 An elderly man who was found alive after he went missing for over 24 hours from his home in Lissadrone, Co Mayo, last month subsequently died in hospital.

Hundreds of locals joined Gardaí, the coastguard and Mayo Civil Defence in the search for 87-year-old John Lockwood who spent the night outside in the cold without a coat before he was located not too far from his village.

His disappearance made local and national news, while the Lacken and surrounding neighbourhoods rejoiced when he was found “safe and well” after much community effort.

Mr Lockwood was taken to Mayo University Hospital in Castlebar where staff were optimistic he would make a full recovery, according to his daughter Sharon Lambley.

However, his health deteriorated and he died in the early hours of the morning of October 22.

Ms Lambley said her father was given pain relief and was comfortable in his final hours.

“My dad didn’t know he was dying. He was relaxed and it was like he just fell asleep holding my hand,” she told the Western People.

“I am so glad he died in hospital and not out in a field in the cold, which would have been horrendous,” she said.

Ms Lambley said she wished to thank all of the local volunteers and service workers who completed a “very thorough” search. She was also grateful for the regular alerts from Midwest Radio that kept her father’s situation at the fore of people’s minds.

“All of these services provided a fantastic community response and the family are grateful to everyone who helped locate (our) dad,” she said.

“The people who came out to look for Dad were amazing. Words fail me really,” she added.

Her father John was amazed and grateful to hear how many people had turned out to find him, she said.

“He was keen to thank the people that looked for him and was looking forward to going home, but sadly his health deteriorated,” she added.

The staff at Mayo University Hospital also provided an “amazing” service in his final hours, she said.

“The people are very special here,” said Ms Lambley, adding: “In England, it is all about efficiency, but here people really value community. They gave up their time and came together to find him.”

Six weeks earlier, Ms Lambley brought her father, a former policeman from Yorkshire, England, to Ireland to do the things he had always loved doing, including fishing and painting. He donated some of his paintings to AIB in Ballina, where they were displayed in October. Money raised will go to the Mayo Roscommon Hospice.

Mr Lockwood had developed a strong bond with the West of Ireland through his late wife Mary, who was from Lacken, Co Mayo. They would stay in their holiday home in Lissadrone each summer and a few other times per year.

Recently he had enjoyed spending time with family and friends, and visiting places he loved to paint, Ms Lambley said.

“I took him to all these old pubs he loved, and he was back painting again. It was great,” she said.

John Lockwood was laid to rest on October 26 in Rathfran Cemetery, Co Mayo, next to his wife Mary Lockwood.