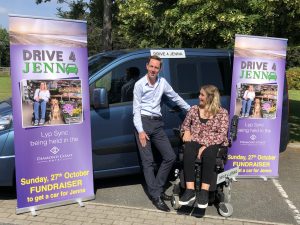 A fundraising event brought in €35,000 from ticket sales, donations and sponsors to help purchase an adapted vehicle for an Enniscrone woman who became paralysed in a freak accident five years ago.

More than 600 people turned up to the Drive4Jenna Lip Sync event held in Jenna Fitzgerald’s native town on October 27, with locals from Enniscrone, Easkey, Ballina, Castleconnor, and Dromore West performing on the night.

At the age of 27, Jenna Fitzgerald injured her spinal cord during an ill-fated dive into a swimming pool in Spain.

In 2017, she penned an article for the Western People in which she documented her rehabilitation. She has made enormous strides but has had to rely on carers to drive her around. A new vehicle would allow her to regain her independence.

The money raised from the event will go a long way towards the purchase of a hand-controlled car, which costs around €60,000.

One of the chief organisers of the event, Peter Regan, said the generosity shown by people from Enniscrone and neighbouring towns made him “very proud of the area”.

He wished to expressed his deep gratitude to all who performed, the businesses who sponsored the night, and the small team who helped organise the event “without whom it would not have been a success”.

“This was all for a very good cause and a lot of people came out,” he added.

Mr Regan came up with the idea of a large fundraising event after Jenna had expressed her desire to return to driving during a radio interview with RTÉ’s Ryan Tubridy in November 2018.

“I really had to twist her arm to get her to agree to it because she is very shy about asking for money,” he said, adding that the evening was “great fun, but certainly very tiring”.

Jokingly, Mr Regan added that once Jenna gets her vehicle, he will be expecting plenty of lifts from her.

Still a way to go before they reach their target, Mr Regan said donations can still be made via ifundraise.ie