A golden year to be a Sports Star 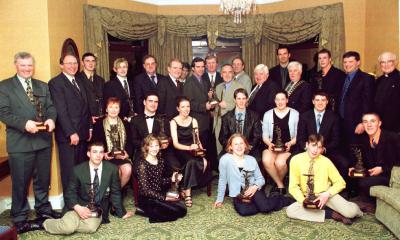 2019 is far from complete in a sporting sense yet already it has been illuminated by the deeds of some truly great Mayo sportspeople, across a range of disciplines and codes on local, national and international stages, and now is your opportunity to nominate who you believe is deserving of the ultimate recognition – their crowning as a Western People Mayo Sports Star.

This week marks the start of the countdown to the 50th annual Western People Mayo Sports Stars Awards and a spectacular gala presentation banquet that will take place in Breaffy House Resort on Saturday, January 25, 2020.

Every year since 1970 the Western People has paid homage to not only the finest sporting talents in Mayo, but the coaches, administrators and volunteers who have helped shape the careers of these elite athletes, with its annual Mayo Sports Stars Awards, and the search for the newest generation of award winners – in this golden anniversary year – is now underway.

The democratic nature of the awards is such that each winner is nominated by you – the public – and deliberated upon by a Western People selection committee, ensuring that only the most worthy recipients are honoured.

Nominations can be submitted for all sports, ranging from the mainstream to the niche; heroes from Gaelic football and soccer, rugby and basketball, athletics and boxing and every sport in between have been included amongst the ranks of Mayo Sports Star recipients, and 2019 is expected to be no different. Indeed the list of past winners reads like a who’s who of Mayo sporting legends.

So, if you know of an individual, group or team of Mayo sportspeople who have performed exceptionally during the past twelve months, we want you to tell us about them.

Similarly, if you know of someone who as a coach or mentor has dedicated themselves endlessly, this year or over the course of their career, to facilitating the success of others in their community, then tell us all about their unstinting service and achievements.

Or if you know of someone worthy of consideration for the prestigious Young Sportsperson of the Year (under 18 on January 1, 2019), Sports Personality of the Year or Hall of Fame awards, then we want you to tell us exactly what it is that sets your nominee apart from all the rest.

Over the years, such icons of world sport as Sir Alex Ferguson, Paul McGrath, Ray Houghton, Sonia O’Sullivan, Ken Doherty, Barry McGuigan and Andy Lee have attended the annual Mayo Sports Stars Awards gala banquet, which has established itself as the foremost sporting and social occasion in the county, and there’ll be another high profile addition to that list of special guests for the 50th anniversary celebration next January.

The closing date for nominations is Friday, November 29, 2019. See Page 24, Game On, in this week’s Western People an for entry form.