Knockmore native Hugh Armstrong delivered strongly at the KBC Dublin Marathon yesterday (Sunday), to record a personal best and finish as the third Irish man, in the fastest ever race on the streets of the capital. 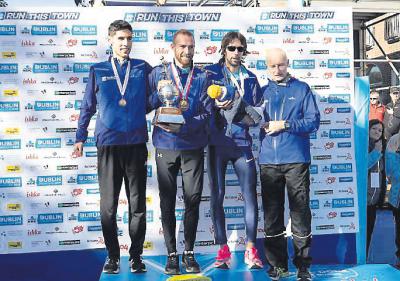 The Ballina AC runner finished eighth overall, in a time of 2:14:21, six minutes behind Morocco’s Othmane El Goumri who broke the course record in 2:08:06.

Best of the Irish was Stephen Scullion who smashed his personal best in 2:12:01 to finish second overall, with Mick Clohisey the next best Irish man in sixth in two hours, 13 minutes and 18 seconds.

With dry and crisp conditions, it was the perfect weather for a fast race, and Armstrong got off to a strong start.

“I was feeling good for a long way, up until maybe the last three miles or so and then it was starting to feel very tough,” he said.

“Stephen who came second overall was very, very good at the National Championships. The fact that there’s points going for it now for the Olympics has added a great deal to it now also too,” said the former Gortnor Abbey student.

With Tokyo 2020 just around the corner, could it be that Hugh Armstrong has found his ideal distance for possible qualification? Could he join with Belmullet native Sinead Diver in providing Mayo with two marathon runners at the greatest show on earth? Australia-based Diver did not take part in Dublin as she instead has focused on next weekend’s New York Marathon.

“It was always said to me that people thought that I would be good at the marathon,” Armstrong said afterwards.

“From when I was a junior I was able to run a good 10k on the track and stuff. I was always told that the marathon would be the distance for me.

“Throughout college, when I was in Providence, they said that 2019 would be a good year to have a go at your first marathon and see if I could get a good time in for Tokyo.

“Now I will have to do a second performance, but I am well on the way and very proud of myself today.”

Westport AC were also strongly represented with 22 athletes from the club taking part.

Is this the youngest county final referee ever?