The recent €241m allocation for the N5 Westport to Turlough road project has prompted a Ballina hotelier to call for a widening of the vision for the ongoing feasibility study into the development potential of the Moy Estuary area. 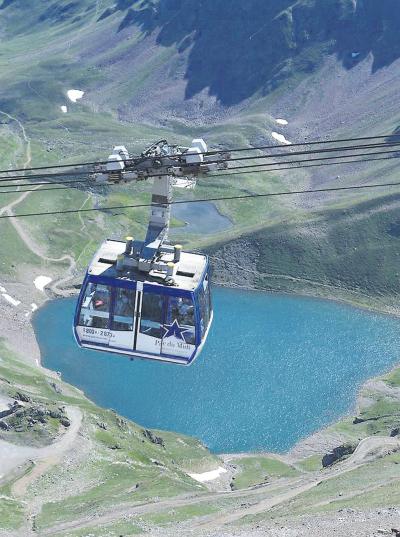 A cable car across the Moy Estuary could connect Killala and Enniscrone via a stop on Bartra Island.
Fotoware

The study, which has been commissioned by Ballina Lions Club, has been informed by several public consultations in the Enniscrone, Ballina and Killala areas in recent months.

The public was updated on the process at a meeting in Ballina on October 7 last where the plan’s author, consultant Enda Candon, revealed that the emerging themes around which the area should be developed include the construction of a greenway between Ballina and Enniscrone, the development of an artificial diving reef in Killala Bay and the creation of experiences based around the area’s rich history, angling heritage and abundant waterways.

There was some criticism that the plan did not consider some of the “blue sky” ideas that had been put forward by members of the public and was, instead, veering towards copying developments that already exist in the area such as greenways.

He is also an inventor who, together with his business partners, held the original patent for technology that is critically important to the modern-day smartphone and other devices.

With years of experience in the international tourism industry, he has travelled the world and is urging that the Moy Estuary feasibility study set out a vision that is big enough to put the famous river and Mayo firmly on the map.

In light of the announcement of a €241m allocation for the N5 road project, he argues that the communities of the Moy Estuary area should not be afraid to dream in similar proportions for their areas.

While he agrees that many of the proposals that emerged for the Moy Estuary area from the public consultation process can and should be done anyway, Mr Doran points out that a greenway, a footbridge between The Quay and Belleek Woods, the relocation of the local sewage treatment plant etc will not convince an American couple contemplating a trip to Ireland to choose the north Mayo/west Sligo area as their base.

“The idea is to stimulate tourism in this triangle and provide an economic boost to the area — a reason to come here,” he argues.

To illustrate his point, Mr Doran “brainstormed some crazy ideas” that would arouse interest and encourage overseas travellers to come to the Ballina area for consideration as part of the Moy Estuary feasibility study process.

His vision is grand and espouses the area being marketed as the Moy or Golden Triangle — a haven for golfers, whiskey lovers and more.

Flagship attractions could include a unique straight line golf course down the banks of the Moy in Ballina to Killala to include several holes on Bartra Island; a commuter aerodrome in Attymass to facilitate ease of access to the region and a seasonal rope bridge between Downpatrick Head and Dun Briste.

Instead of a greenway forming the spine of this area — as is currently being espoused — the defining appeal of the estuary area could be an aerial monorail system along the Moy between Foxford and the Céide Fields and with multiple stops for locals and visitors alike along a route that takes in Attymass and crosses the river at Riverslade in Ballina. Here there would also be a spur to take people to the golf club on Bartra Island while the mainline continues out to Killala and beyond to cross the cliffs at Céide.

The monorail would afford visitors the opportunity to “ride the Wild Atlantic Way” while sheltered from the elements”, he explained.

“The monorail should be as exciting as possible running close to the cliffs even traversing over some ravines,” he states in his submission which advocates hubs for electric car/bike rental at each monorail station.

Another concept worth considering would be the development of a cable car crossing of the Moy Estuary between Killala and Enniscrone via Bartra Island.

Other potential developments that could be explored for the Moy Estuary area include docking facilities for small cruise liners in Killala Bay, a boutique container port; inclusion on the route of the luxurious Belmond Grand Hibernian train; the development of a football stadium at Belleek and the redevelopment of the Asahi campus near Killala into a college or university that pioneers learning through artificial intelligence.

The area could also become a centre of excellence for the distillation of whiskey.

Although he acknowledges that his envisaged scheme may be crazy in terms of its scope and scale, Mr Doran points out that it would link the main towns and villages of the Moy Estuary area and generate benefits for local businesses, residents and tourists.

While a monorail might be expensive it would have a very small footprint on the landscape and could be used by locals and tourists alike.

Mr Doran says a scheme of magnitude is required if northeast Mayo is to be effectively opened up to tourists in a manner that would complement the offering of other areas like Westport.

He stresses that his vision is one that can easily be refined. A monorail might not be realised but a seasonal cable bubble system or even an electric train might be attainable.

Of paramount importance is that any developments in the Moy Estuary region would benefit locals and not upset them in any way.

Local Cllr Mark Duffy remarked that the N5 funding is proof of what can be achieved in an area with the right people maintaining pressure and working together.

“We should not be limiting ourselves in this area by what we think might be possible or by what is done in the south of the county. We can think for ourselves and dream for ourselves.”

He continued that there had been disappointment that a footbridge to connect the Quay Village to Belleek Woods had not featured among the emerging themes of the Moy Estuary study even though it had been one of the most frequently recurring proposals.

“What if Monsignor Horan had been told to think more realistically when he proposed building an airport in Knock all those years ago? That is the type of thinking we should have in this area and the passion to see it through,” he concluded.