The captain of The Neale, Aidan O’Sullivan, said he is now looking forward to the challenge of playing senior football after they gained promotion to the top table of Mayo football for the first time in the club’s history, which spans over a century. 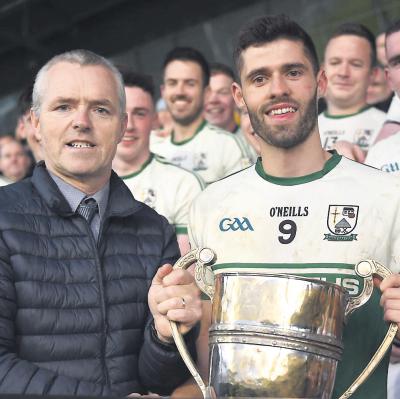 He spoke to the Western People after his side’s narrow intermediate final victory over Ballyhaunis on Saturday evening in MacHale Park, which saw O’Sullivan become the first club captain to raise the Sweeney Cup.

O’Sullivan was part of The Neale team that came up to intermediate after winning the junior championship in a final replay against Ardnaree Sarsfields in 2012 and said that he and his teammates are well aware of the challenge that lies in front of them.

“This is the first time ever in the club’s history that we’ve gone senior and we’re just going to look forward to it for now. Obviously we’ll have to improve over the coming months but I cannot wait for it,” he said.

The Neale found themselves five points behind at half-time with just four scores on the board, via a pair of frees from Sean Cosgrove and points from Tommy Conroy and Stephen Morrin, but O’Sullivan said himself and his teammates were not overly worried at the break. They scored one goal and eight points in the second half to narrowly see off Ballyhaunis.

“There was a strong breeze, so going in four points down at half-time, we weren’t panicking. We knew that breeze could make a difference for us and we’re delighted that it did and that took us over the line,” he said.

The game was extremely tense in the closing minutes, with the sides level coming into added time. It had been a much tighter second half, which saw Ballyhaunis tie up the game having fallen four points behind after a resurgence from The Neale.

Their winning point came in dramatic circumstances, when a fumble from a Ballyhaunis defender saw Tommy Conroy and Sean Cosgrove break away at pace with the latter popping the historic winning point over the bar. O’Sullivan hailed the courage and determination of his teammates at this crucial moment to push the Neale over the line.

“It was a massive battle. Either team could have won it but luckily we nicked that score at the end to see out the game,” he reflected.

“The lads really stood up there, Tommy and Seanie managed to get their hands on the ball and sure enough, we converted it. We’re delighted with it.”

O’Sullivan was keen to point out the impact that the youth system at the club has had on this year’s success, describing it as the biggest difference for the club in the last few years.

“The likes of Tommy Conroy, Fergal Sweeney and Brian O’Halloran are all players who stood up today against Ballyhaunis and I’m delighted for them young lads,” he said.

“That’s been the biggest difference for the club in the last few years. Underage players coming though and adding their energy to the squad.”