Mayo Renewable Ltd has reimagined its proposals for a power plant at Killala to include a €150m data centre which is already being actively pitched to major players in the global IT sector. 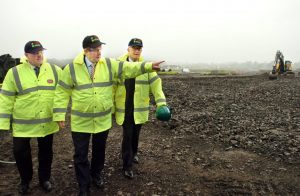 The controversial project stalled in 2016 when it ran into financial difficulties.

A new promoter has since come on board to complete the part-built, high-efficiency, combined heat and power biomass plant, but progress has been stymied by difficulties in securing an adequate certificate of high efficiency for its operations.

The Commission for the Regulation of Utilities (CRU) is currently adjudicating a new application for high-efficiency certification following its decision earlier this year to issue one at just 18%, which would have rendered the Mayo Power project financially unviable.

A decision is expected before the end of the month but in the meantime, it is understood Mayo Power is completing the final design for the project, which will see its site at the former Asahi plant transformed into a high-efficiency power and thermal use campus.

In the region of €100m has already been spent on the planning, design and construction of the power plant.

An additional €130m is now being spent on the final design which will require an extra €150m investment of private capital to construct the proposed 100,000sq ft data centre.

The project is being referred to as the Killala High-Efficiency Data Park and will also serve as a research campus for institutions concerned with biomass and sustainable energy practices.

Mr Hynes said it was hard to understand why the CRU is taking so long to renew the certificate of high efficiency that was originally issued to the project in 2012, given that there have been no changes in legislation or Government policy in the interim.

Local Fine Gael senator Michelle Mulherin believes the addition of the data centre should help allay the regulator’s concerns in relation to the displacement of the heat generated by the Mayo Power plant.

The timing of the data centre proposal is opportune, she added.

With Dublin reaching capacity for such developments, investors are looking elsewhere in Ireland, and Killala — with its proximity to the AEConnect high-speed fibre optic cable — is an ideal location.

“For my part, I will be calling on the Minister for Business, Enterprise and Innovation Heather Humphreys to put further pressure on the IDA to help this proposal across the line,” Sen Mulherin said of the reimagined plan.

“The CRU needs to stop delaying and make a decision,” he said.

Mayo pyrite victims to take their campaign to the streets