A cash-strapped animal welfare organisation has been compelled to offer a €500 reward for information in relation to a shocking incident of animal cruelty in Ballina this week. 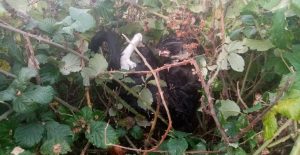 The remains of the tortured kittens were found dumped in a thorn bush in a field near Ballina Swimming Pool.

A local family that had taken in and lovingly cared for two kittens was distraught to discover in recent days that they had been tortured to death.

The remains of the adored family pets were discovered in a field near Ballina swimming pool one week after they had gone missing and showed obvious signs of torture, according to the family.

In a Facebook post last night the North West Society for the Prevention of Cruelty to Animals (NWSPCA) said the kittens, who were just months old, had been adored by their adopted family who had provided the pair with ” a perfect home” and afforded the kittens every protection possible.

“These two beautiful kittens were so loved and valued by the whole family. They were house pets with the occasional forage outside into their garden. They were stolen, tortured and killed by a sick soul-less individual(s),” the post reads.

The charity is offering a reward of €500 for information that might lead to the detection and conviction of those responsible for the cruelty.

NWSPCA says it would offer a higher reward but simply does not have the funds.