A life of wholesale service to the club

Paul McHugh’s lifetime of service to Ballaghaderreen GAA will reach its high point this Saturday evening as he leads the men from the border town into the county senior final, writes Mark Higgins. 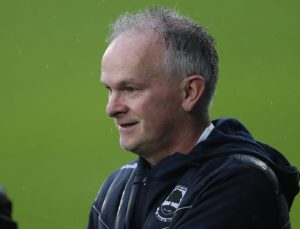 There aren’t many jobs within Ballaghaderreen GAA Club that Paul McHugh hasn’t turned his hand to over the years. Over the course of the last three decades or so, McHugh has coached Ballagh’ footballers through the age-grades from U6s right up to senior. If you’ve kicked a ball for the Green and White at some stage in the last 30 years, chances are you’ve played under McHugh at some point or another.

The biggest game of his managerial career to date comes this Saturday night, when McHugh will lead Ballagh’ into the county senior final against Ballintubber at MacHale Park. It will be the culmination of his two-year journey with this particular team, but in a wider sense, the reward for a lifetime spent in service to the local club.

“But there are so many people in Ballaghaderreen that are the same, which is great. The lads in with me now, the likes of Dessie Lynch, he’s been involved with different teams all the way through. Gary Conway and Barry McGuire are in with us as selectors. And then you have the likes of Martin Coyle, Kevin Cahill, my brother Declan, and new lads coming in like Richie Conway or Noel Regan.

“There are older lads as well, the likes of Joe Dillon Snr, who has been carrying that club for junior level for years. These boys are great.”

McHugh is steeped in the life of the club and the town itself. He and his wife Kathleen run a wholesale business on Main Street, and their two sons, Sean and David, will be on the Ballagh’ panel that runs out at MacHale Park just before 7pm on Saturday night.

The final will be the only subject of conversation in the town this week – “There are people coming into the store, everyone knows I’m involved with it, so they just talk away about the game,” says McHugh – and few in the border town will be underestimating the challenge awaiting their boys as they go up against the reigning county champions.

“Ballintubber are a serious team,” offers McHugh of the opponents. “To get back to a county final the year after winning it, in a county like Mayo which is so hard to win, is serious stuff. Castlebar had done it for years and now Ballintubber are doing it.

“They’re a serious team all over the field. They’re strong at the back, they’re very strong in midfield. They have the lads we know up front, Alan (Dillon) and Cillian (O’Connor), and then they have the new boys brought in, young (Ciaran) Gavin and young (Stephen) O’Malley.

“We’ll have a right look at it over the next week and see if there’s any place we can exploit them.”

Ballaghaderreen’s campaign began way back in April with a hard-earned first-round win at home to Claremorris. It was a game in which McHugh’s men trailed for almost the entire hour before Andy Moran’s late penalty finished out a dramatic comeback. “The problem at the start of the year with that isolated game is that you have to win it. It’s so vital to the year,” recalls McHugh.

“You don’t have the county lads training with you. We only had them for one league game before that. Luckily enough we got through that game. We were 0-11 to 0-3 down at one stage and a late penalty won us the game, which was brilliant. That carries the momentum through.”

The way the club season is structured meant Ballagh’ didn’t play much serious football for another four months. Between players heading away for the summer and county men sequestered away with Mayo, numbers dwindled to perilously low levels. For one league game at home to Breaffy in July, McHugh was without as many as ten of his first-choice players (they ended up winning the game regardless).

“We lost a lot of lads who went away for the summer, but that gave us the chance to use our whole panel. These lads have got plenty of football with the other lads gone. I think we have 32 lads on our panel and every single member of that 32 have played some league football this year. That says a lot in itself,” he reflects.

“Then when we got everyone back, when the county lads came back, and the championship starts rolling, it makes such a difference to us. You see a huge difference in training, everyone is playing together, and the momentum has kicked in.

“We have got better and better over the last couple of months.”

One player who has caught the eye over the last few games, as Ballagh’ topped their group with a 100 percent record before beating Davitts and Mitchels to reach the final, is Ryan Lynch. The midfielder kicked 0-4 from play in the semi-final and McHugh, who has coached Lynch up through the grades in the club, said his excellent form has come as no surprise.

“Ryan has been playing like that since he was a young buck,” says the manager, agreeing when it’s put to him that a county call-up can’t be too far away.

“Oh 100 per cent,” he answers. “I think we have a few lads out there who are good enough, but that’s for the Mayo manager to decide. Ryan has been pushing for the last few years; I don’t know why he hasn’t been called to be honest.”

As well as the younger players stepping up to be counted, McHugh has been able to call upon the services of some of Ballagh’s more battle-hardened campaigners over the course of this campaign. Both Stephen Drake and Barry Regan are in the panel and came off the bench in the win over Davitts, and McHugh says that coaxing both men out of their semi-retirement has been a hugely important factor in this run to the final.

“Barry wasn’t really going to be playing this year, he had sort of retired, but we convinced him to come back and give us what he could,” says McHugh.

“He was caught with work and they have a new baby, but we asked him to come back whenever it suited him.

“To have him around the place and have him involved in a huge asset, even if he’s only played a few minutes.

“Stephen came back at the start of the year. He was a selector last year but he came back and he’s got better and better as the year has gone on, and he’s an option on the line. He’s even kicking points in MacHale Park now, it’s great to see!”