Michael Ring T.D., The Minister for Rural and Community Development, has confirmed that the Cabinet has given its approval for the construction of the N5 Westport to Turlough Road. 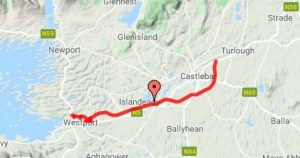 The Cabinet has given its approval for the construction of the N5 Westport to Turlough Road.

The proposed €241 million road development involves the construction of 20.3 km of dual carriageway from Westport to Turlough and a 2.5 km single carriageway link to the N59 Westport to Mulranny national secondary road.

Minister Ring remarked: “This is the single largest Government investment in the history of Mayo and it will have a transformative effect on our county. Work is due to begin later this year.

“The benefits for road users from near and far as well as local residents will be immense. It will result in safer and less time-consuming journeys and an improved environmental quality in the towns of Westport and Castlebar by removing through traffic.”

He said the development would also bring strategic benefits by encouraging investment and supporting employment in the county while also enhancing connectivity locally.

“I have pushed hard at Cabinet level for the new N5 to be delivered and I commend An Taoiseach, Leo Varadkar; the Minister for Finance and Public Expenditure, Paschal Donohoe, and the Minister for Transport, Shane Ross, for supporting this landmark project,” said Minister Ring.

“This Government is delivering for road users in Mayo. Since Fine Gael came into government in 2011, we have delivered and are continuing to deliver road projects of major significance to the county and the region. This is helping to make people’s journeys safer and shorter as they travel within the county and further afield.”

The new N5 will link up with the N59. A €55 million improvement scheme is currently ongoing on the Westport to Mulranny stretch of the latter route.

Minister Ring confirmed that the scheme approved today by Cabinet also provides for a 2.3 km upgrade of a section of the N59 at Barleyhill to type 3 single carriageway; two compact grade separated junctions including overbridges; six roundabouts; two rail bridges over the Westport to Dublin railway line; 11 overbridges, two underbridges and seven farm underpasses and other associated works.

Woman in critical condition after overnight incident in Mayo

N5 project may be delayed by two years