Eoin Prendergast was the star of the show for Conn Rangers on Sunday afternoon at Solar 21 Park after an exhilarating seven-goal thriller against Kiltimagh/Knock United saw them capture the Premier Cup. 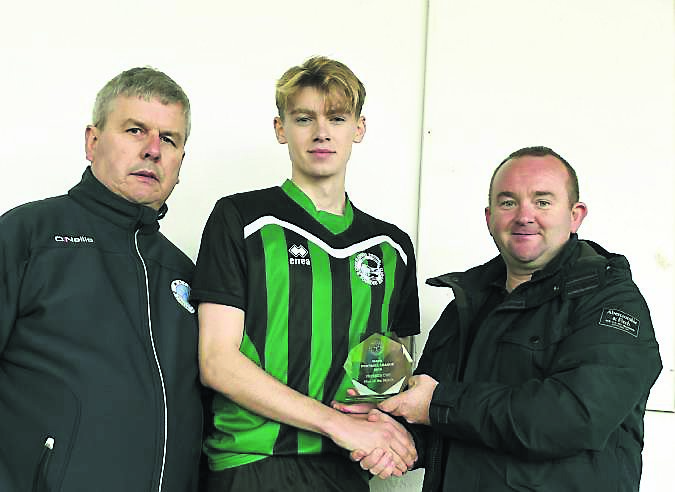 Kiltimagh/Knock were 3-0 down at one stage in this tie, but the East Mayo men battled back gamely and they can take great encouragement from what was a gutsy and resolute second-half display as they prepare for upcoming battles.

The torrential downpour prior to kick-off added some extra zip to the playing surface.

Conn Rangers almost pinched an early lead whilst some supporters were still making their way to the stand.

A slick pass from Conor Flynn teed up Eoin Prendergast, but after rounding the ’keeper, the striker dragged his effort against the side-netting.

United tried their luck from the placed ball on 18 minutes, but Liam Groarke’s free flashed over the crossbar.

The North Mayo men appeared to be playing the better football and they were rewarded for their efforts on 27 minutes as they managed to edge in front.

Liam Durkin was the architect, his through-ball setting up the lurking Prendergast allowing the latter to coolly apply his simple close-range finish.

Five minutes later, the Green and Black were in dreamland.

This time Prendergast was the orchestrator, as he laid off the perfect ball to Lorcan Towey, whose absolute screamer from the edge of the box left Niall Walshe rooted to his goal-line.

Rangers could well have been out of sight by the stroke of half time, however, Jack McNamee saw his close-range effort hooked off the line by the retreating Sean Murphy.

Kiltimagh/Knock knew that a positive start to the second half was imperative if they hoped to have any chance, but disaster struck just one minute in.

Some slack marking from the United defence was seized upon by Darragh Jordan, who was given too much time and space on the ball, and his sizzling effort rustled the back of the net.

Some teams may have crumbled at such a deflating setback; however, United picked up the pieces and pulled a goal back on 55 minutes.

In an example of what counter-attacking football at its best, Darragh Hanlon latched on to possession and arrowed a smashing finish past Brian McMahon, with the custodian probably disappointed to have been beaten by a shot at his near post.

Rangers played some eye-catching football at times, and this was evident on 64 minutes, when a plethora of passes eventually set up Lorcan Towey, who forced Niall Walshe into action.

On 71 minutes, it appeared that United’s brave resistance had ended when the Green and Black pounced for a fourth.

The goal was fit to grace any stage, as Prendergast collected possession and bore down on goal, rounded the ‘keeper, and waltzed his way past numerous challenges before sliding the leather home in some style.

The aforementioned goal was a real Goal of the Season contender, and no doubt will be etched into the proud history of the Mount Falcon outfit.

However, the old saying that teams are most vulnerable after scoring certainly rang true two minutes later, when United’s super-sub Justin Kelly guided home a peach of a finish from the edge of the Rangers’ area.

A probing left-wing delivery from Kiltimagh/Knock’s Dylan Webb was bundled into the back of the net by the poaching Cormac Caulfield.

All of a sudden, the game was unexpectedly back in the melting pot.

A frantic finale ensued, made all the more tense after Rangers’ Patrick Armstrong was shown a red card.

United huffed and puffed as they searched for salvation, however, Conn Rangers weren’t going to be denied and the Green and Black held on for a famous victory.