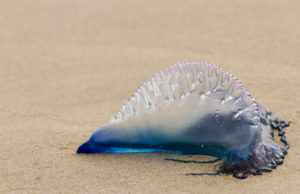 Dozens of poisonous Portuguese man o’ war have washed up on several beaches across Mayo.

The deadly species have been spotted on Achill Island’s Keel Beach, and on beaches in Killadoon, Mulranny Doolough and Doohoma.

Their tentacles, stretching up to 30m in length, have an excruciating sting that in rare cases can be fatal. A sting can cause swelling of the airways, difficulty breathing, and fever. The tentacles often remain venomous for several days after the jellyfish has died.

While the creature is often mistaken for a jellyfish, it is in fact a colony of organisms. It is silvery-blue in colour with a purple tinge.

Water Safety Development Officer for Mayo County Council, Patricia Flynn, urged the public to be wary and keep their distance from the species, both on land and in the sea.

“Don’t walk barefoot on the beach because they have very long tentacles with a venomous sting,” she said.

She also reminded dog owners that animals are not immune to the sting.

If stung, people should refrain from rubbing the affected area as this may result in further venom release. Sea-water should be used to rinse the affected area, while the council warns against using fresh water, vinegar or urine. The council also encourages anyone who feels more than mild discomfort to seek medical attention.