Nephin Whiskey will be up and running in 2020

The village of Lahardane is set to be transformed next year with confirmation that the long-planned Nephin Whiskey Distillery will commence production in early 2020. 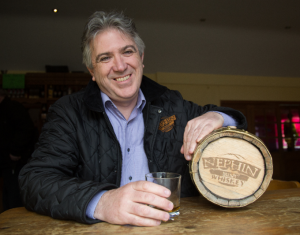 Dr Paul Davis, the founder of Nephin Whiskey, has confirmed that a funding allocation will allow the Lahardane distillery to be completed in the coming months with a view to going into operation in early 2020.

Company founder Dr Paul Davis confirmed to the Western People that funding of €2.5m has been received from the Davy EIIS Fund, which will finance the completion and fitting out of the €7.5m distillery in time for the commencement of production and the creation of 22 jobs in the rural village next year.

The Davy EIIS Fund is a joint venture between Davy stockbrokers and corporate advisory firm, BDO, and has been investing in high-growth Irish businesses for 20 years.

It’s five years since Nephin Whiskey was first launched but the company has not been idle behind the scenes, operating a cooperage that employs six people in Foxford and a licensed spirit importation subsidiary in Florida in the USA.

At present, the distillery building is 80 per cent complete. Once operational, it will have the capacity to produce one million litres of whiskey per year.

“We hope all of the engineering works will be done quickly and that we will get into production early in 2020, with 22 people working in the distillery in Lahardane.

“That’s a huge thing for a tiny village,” said Nephin Whiskey director Mark Quick, adding that the recruitment will take place in stages over the coming months.

The Nephin Whiskey distillery will be focused on whiskey distilling only, with no plans to produce white spirits.

“We’ve got quite a unique offering here because we use local turf to malt the barley which makes the whiskey really distinctive with a very smoky taste,” Mark explained.

“We use water from Nephin and have local farmers around Lahardane growing barley for us on a pilot basis.

“Every aspect of the whiskey distillation will be done on-site in Lahardane so we will have control over it from start to finish.”

The completed distillery is set to become a major visitor attraction too with 1,500 tourists from Ireland and beyond already having visited the site this year alone.

Dr Davis paid tribute to the community and businesses of Lahardane and its hinterland for the support they have shown the enterprise over the years.

“We would not be where we are today without the support we have had on the ground.”

He said he appreciated the importance of the project for the North Mayo village.

“It’s great to have got such an investment especially when we know how much it will mean for the local economy as we grow over the coming years.”