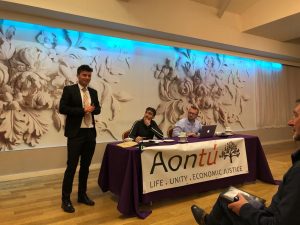 Paul Lawless speaking at an Aontú’s selection convention on Sunday

Aontú’s Paul Lawless, who ran unsuccessfully in the local elections in May, has confirmed he will contest the next general election.

Aontú, headed by former Sinn Féin TD Peadar Tóibín, held a selection convention in Castlebar on Sunday where Mr Lawless was officially selected. The 32-county Republican party, which was formed in January of this year, is dedicated to Irish reunification, economic justice for all, and is staunchly anti-abortion.

Paul Lawless, a teacher at Ballyhaunis Community School, ran for a council seat in the Claremorris constituency where he received 677 votes. The electoral area was dominated by Fine Gael, with the party taking four of six available seats.

Since the local elections the Knock native has has been involved in the creation of Aontú’s bill to ban below-cost selling of Irish beef and has organised a “blind bus” to take people waiting more than three years for cataract surgeries to have their operations in Belfast.

With just one Aontú TD in the Dáil, Mr Lawless said he hopes to join Meath West’s Peadar Tóibín in giving rural Ireland a voice.

“Fine Gael are fixated on Dublin and have an M50 vision, while Fianna Fail are content in supporting them,” he said.

He said he is “utterly dismayed” by the recent budget that punishes people living in rural Ireland. The “regressive” carbon tax hike, which adds 5.3 cents to a litre of diesel, is unfair to people who have no public transport option must use their cars, he argues.

Aontú Mayo is hosting a farmer’s meeting in the TF Castlebar on Monday November 5 at 8pm to discuss their beef bill. Alo Mohan, the poultry farmer who exposed alleged tax abuse in the livestock industry, is scheduled to speak at the event.