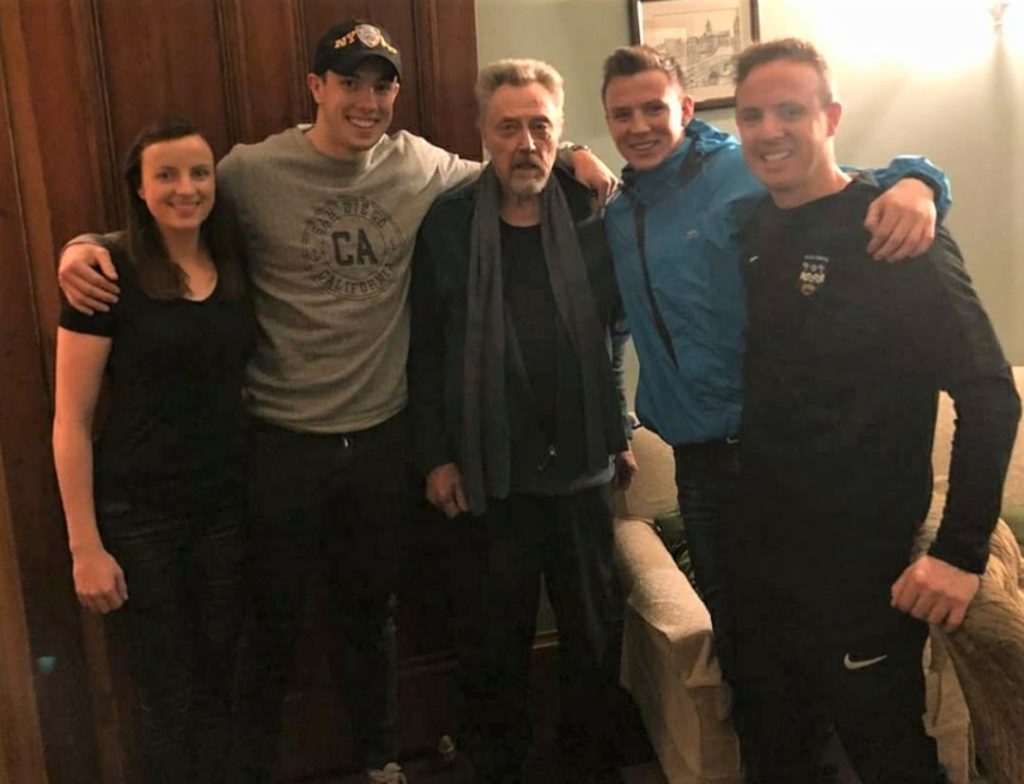 Members of the Duffy family with actor Christopher Walken who is in the Ballina area to film the movie “Wild Mountain Thyme”.

Ballina’s Mount Falcon estate will be transformed into a New York bar in the coming weeks when it will be used to film scenes for the movie “Wild Mountain Thyme”, which is being filmed locally at present.

The cast and crew are into their third week of filming and locals have had encounters with most of the lead actors at this point.

Selfies with Jamie Dornan, Emily Blunt, Jon Hamm and Dearbhla Molloy have been doing the rounds on social media but so far Christopher Walken (who plays Dornan’s father in the movie) has proven slightly more elusive.

Yesterday evening, Sunday, October 14, local politician, Cllr Mark Duffy, and his family had the good fortune to cross paths with the Hollywood legend who has starred in the likes of Annie Hall, The Deer Hunter, The Dogs of War, A View to a Kill, Batman Returns and True Romance to name but a few.

The siblings had called into Mount Falcon for a coffee. The hotel was busy and so they were ushered into a quiet room off the reception area.

“My brothers are fans of Christopher Walken and we were literally just joking about how incredible it would be to see him when he came into the room we were in, accompanied by the hotel owner,” the councillor explained.

The actor was pleased to meet fans and happily posed for a photograph with the siblings, who also briefly spotted Jamie Dornan and Emily Blunt.

Cllr Duffy said the cast of the movie appear to be in good spirits and enjoying their time in Ballina and that Mount Falcon itself is expected to be used to film some New York-set scenes in the coming weeks.

On Thursday, October 10 last West Coast Casting, which handled the recent open casting for extras for “Wild Mountain Thyme” issued another call for people of ethnic heritage to feature as extras in exciting New York City scenes being shot in Mayo.

The company declined to comment when asked if the scenes were part of the “Wild Mountain Thyme” shoot.

Anyone interested in applying should email a recent photograph of themselves and their contact details to [email protected] including their location in the subject bar.

Mayo a star alongside Dornan and Blunt in ‘Wild Mountain Thyme’