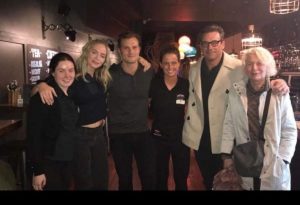 When four movie stars turned up at Ballina’s Jalan Jalan restuarant for a reservation under the fake name, Karen, on Thursday night, waitress Amy O’Connor was none the wiser.

It wasn’t until she seated them in the Asian eaterie that her colleagues informed her that the group was comprised of actors Emily Blunt (“Mary Poppins”), Jamie Dornan (“Fifty Shades of Grey”), Jon Hamm (“Mad Men”) and Dearbhla Molloy (“Tara Road”)

“The sweat was dripping off my face  when I went back to the table,” said 19-year-old Amy.

“They were really nice and they said the food was amazing,” she continued and noted, in particular, that Jon Hamm went out of his way to thank her for the meal.

The stars are currently filming “Wild Mountain Thyme”, in the Ballina/Crossmolina area.

This is the first time that the lead cast members have been spotted together in public since arriving in Ballina with the exception of veteran star Christopher Walken who plays the father of Jamie Dornan’s character in the film.

The group stayed for over two hours in Jalan Jalan last night, during which time their location was made known on social media.

“About 20 young people tried to come in to have their picture taken with them, but we had to set a policy and turn them away,” said Ms O’Connor.

Earlier in the week, Emily Blunt, who also starred in “The Devil Wears Prada”, was filmed pulling a pint of Guinness in Crossmolina’s Thatch Inn in a clip that quickly went viral on social media.