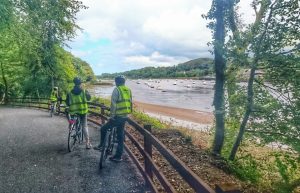 A greenway connecting Ballina to Enniscrone is an emerging proposal from the ongoing feasibility study of the Moy Estuary’s future development potential..

A greenway connecting Ballina to Enniscrone is the proposed “spine” around which the future development of the Moy Estuary area should be planned, local communities have been advised.

The greenway is one of five emerging themes from a recent public consultation process undertaken in the communities of Killala, Ballina and Enniscrone as part of a feasibility study that Ballina Lions Club has commissioned to help chart the sustainable future development of the estuary area.

The study is being compiled by consultant Enda Candon who updated locals on his progress at a meeting in Ballina’s Kennedy Glasgow Building in the Quay Village on Monday evening, October 7 last.

The greenway, together with the development of an artificial diving reef in Killala Bay; experiences based around the area’s rich heritage and history; the promotion of its angling heritage and water-based activities on the Moy will collectively allow the estuary area to stand out and have a broad market appeal, the draft study has established.

“The greenway is really important because it becomes the spine of the whole experience that links all of the sites and the experiences and towns and villages in the area together,” Mr Candon stressed, adding that the Kennedy Glasgow Building at the Quay in Ballina could become a multi-use civic hub around which visitors to the Moy Estuary area could orient themselves.

He assured the attendance that the envisioned Moy Estuary product/experience would tie right into the concept of the Wild Atlantic Way and will resonate with Tourism Ireland and Failte Ireland as a result.

There was some criticism from the attendance that the plan did not include some of the most popular proposals made during the public consultation process such as a footbridge over the Moy between Belleek Woods and the Quay.

Others argued that it was not innovative enough and urged that “blue sky” ideas be considered instead of copying what has already been done.

Mr Candon aims to complete the plan by mid-November when a steering group will be put in place to oversee its implementation and brief communities on the progress.

Full report in next week’s Western People – out Monday, October 14.