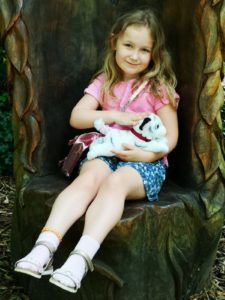 Emma Grant has lived with narcolepsy for the last two years

Emma Grant was a happy, outgoing, normal child with a belly laugh that brought a smile to those in her company.

Then, at the age of five, she began to develop a rare illness that exhausted her, dumbfounded doctors and tormented her family.
“She was totally fine, and then it just changed her life,” Emma’s mother Naomi Grant told the Western People.
“I could see it in her eyes,” Ms Grant said. “They were vacant. It was like they turned into little pinholes.”
Emma’s tongue would loll out her mouth, her speech was slurred, and her knees became unstable, often causing her to collapse to the floor.
A loss of muscle tone during one of these episodes meant she couldn’t cry out for help. Tired all of the time, Emma was fast asleep whenever she was in front of a doctor.
The little girl was poked and prodded as medical professionals struggled to comprehend her case. She had a lumbar puncture, where a needle is inserted into the spine, checking for epilepsy, serious infections, and bleeding in the brain.
“I was like a mad woman. I was on Google all the time, and I came across the condition narcolepsy. It matched all of her symptoms, but nobody would listen to me,” explained Ms Grant, adding there is a lack of awareness of the condition.
Doctors believed Emma was far too young to have narcolepsy, they said. However, she was finally diagnosed with the condition when a specialist doctor returned from leave.
“It was such a relief for someone to listen and believe to what I was saying,” added Ms Grant.
A sleep disorder characterised by excessive sleepiness, narcoleptics often suffer sleep paralysis and dream-like hallucinations. In some cases, as in Emma’s, episodes of partial or total loss of muscle control can take hold of the body.
Emma also experienced night terrors and periods of insomnia at night. Narcolepsy is a lifelong condition that improves only marginally through a cocktail of medicines.
Aged seven, Emma is now heavily medicated. She takes an amphetamine before school and Rohypnol- a potent sedative often referred to as the date rape drug- at night.
She sleeps for around 40 per cent of any given waking day, often arriving at school late and leaving early as she cannot stay conscious for more than an hour or two at a time.
“Some days she is awake for a good bit and she might have enough energy to play for an hour, but the aftermath of that is tough. It takes so much out of her,” said Ms Grant, adding that Emma has no friends because she is scared of falling in the schoolyard when her muscles give way.
Either side of her naps Emma is “cranky, demon-like”.
“Last year she was like a totally different child. I was quite scared,” she said.
“The best way I can explain it is it feels to her like she has been awake for 72 hours.” 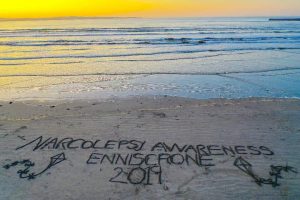 With Emma’s journey defined by a lack of understanding about her condition, Naomi Grant, her husband Derek, and other family members now help to run the voluntary organisation Narcolepsy Ireland.

Set up by Ballina-based Elaine Armstrong, who also lives with the condition, Narcolepsy Ireland aims to improve knowledge and awareness about the lifelong condition.
Marking the first World Narcolepsy Day on September 22, between 200 and 300 people gathered on Enniscrone beach for a kite-flying event. Naomi Grant said she “blown away” by the turnout and support, and she hopes events like this will raise public awareness of narcolepsy.
As Emma grows up, she will hopefully learn how to manage her condition through medication and listening to her body.
“She has started to come back out of herself a little,” said Ms Grant, adding: “I feel I am starting to see a little bit of Emma coming back.”