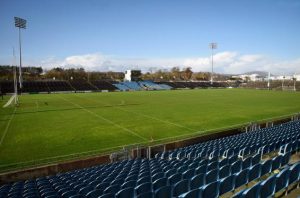 On the weekend just passed, Castlebar Mitchels and Ballaghaderreen contested the semi-final of the Mayo senior football championship. For two clubs of such stature, it may surprise a few to learn that never have they challenged each other in the final. What might come as an even bigger surprise, however, is that 64 years ago the two clubs came face to face in the final of the Mayo senior hurling championship. It turns out that 1955 final was also the last time Mitchels were crowned hurling champions of Mayo.

The men of the county town won that game in MacHale Park by 4-8 to 1-4 having beaten the same opposition by 6-4 to 3-1 in the previous year’s final too; it was Mitchels’ first time to win back-to-back hurling crowns in 49 years.

1955, however, wasn’t the most harmonious of years between county officials of the big and small ball codes; when has it ever been any different, I hear you say. Indeed it was during the course of a rather lengthy Mayo GAA Convention that year that the outgoing chairman, the Rev. P Towey, became embroiled in what was described as a “long verbal duel” with Mr S Hiney, secretary of the hurling committee.

A passage in Hiney’s report was labelled as “ridiculous, offensive and utterly untrue,” after the hurling secretary had highlighted alleged slights which he said had been directed towards his committee at the previous year’s Convention, where hurlers had been referred to as ‘Birds of Passage’.

If that was the impression of Mayo’s club hurlers then, it’s hard not to ponder in what standing they are held today by county officials given that from the mid 1940s right through to and including the 1960s, the Mayo hurling championship appeared to be utterly more competitive than it is nowadays.

In fact, when Tooreen won their first ever title in 1966, the fledgling outfit from East Mayo were one of twelve (yes, twelve!) different clubs to have won the Mayo senior hurling championship in 24 seasons.

Westport and Ballina Stephenites had joined with Castlebar Mitchels in trading the last five titles of the 1940s and prior to their aforementioned defeats to Mitchels, Ballaghaderreen had been crowned champions in 1950 and ’53. Other clubs to lift the trophy in that decade included Charlestown Sarsfields, Swinford and Belmullet whilst Manulla, Moy Slashers, Cong and Claremorris joined Tooreen on the roll of honour in the swinging (quite literally) 60s.

To put all of that into context, only four clubs have won the Mayo senior hurling championship in the past 24 seasons, with 21 of those titles shared between Tooreen and Ballyhaunis exclusively. Castlebar Mitchels will hope they can do like Ballina in 1996 and 2007, and like Belmullet in 2001, and break the dominance of the ‘Big 2’ for one year at least. But what are their chances?

Ballyhaunis pushed Tooreen hard in last year’s county final, losing to the then defending Connacht intermediate champions by only four points, and by the same margin in the opening round of this year’s competition, and in two championship games this year Castlebar Mitchels have drawn with and beaten ’Haunis, the victory by way of a single point in the semi-final having played most of the second half with just fourteen players following the dismissal of midfielder Tony Sweeney. So on the face of it, you might argue that Castlebar, whilst definite underdogs, aren’t without hope of being able to cause an upset if one or two things fall in their favour on the day. But what also needs to be factored into the analysis is that when Tooreen hosted Castlebar Mitchels on the last Friday in August, when automatic qualification to the final was on offer to the winners, Mitchels were whipped by all of 29-points – with very few mitigating factors. Indeed thirteen of Mitchels’ fifteen that evening also started two weeks later when they pipped Ballyhaunis by 0-11 to 0-10 despite scoring only two points from play. In short, anything other than a handsome Tooreen win next Sunday would represent as a seismic shock.

In Corey Scahill, Castlebar do possess one of Mayo’s most accurate shooters and fellow Castlebar attacker Sean Mulroy is not short on inter-county experience either. Further out the field, the work-rate of Tony Sweeney, Conor Murray and James Gallagher sets them apart from most others and Galway native Padraig O’Flynn is a formidable presence at the heart of the Castlebar defence. However, Tooreen would appear to hold far too many aces up their sleeves.

The pace at which the Boland brothers Shane and Fergal, Sean Kenny and Eoin Delaney hurl the ball, especially when combined with the power of Sean Regan and Kenny Feeney, provides Tooreen with an attacking sextet the likes it seems unimaginable that Mitchels would be able to restrict to any sort of retrievable score.

Add to that mix the wise old heads of goalkeeper Stephen Lenehan, Gary Nolan, Michael Morley and Stephen Coyne, and the fierce competitive streak that exists in every fibre of David Kenny’s body, and it’s easy understand why Tooreen have in recent years become a highly respected power far beyond the county boundary.

Indeed for their own part, this current group of Tooreen players are striving for something that was once second nature to their club but which hasn’t been done in nineteen years – the three-in-a-row of Mayo SHC titles. It was actually a fourth title in succession that the Blues had won when they beat Ballyhaunis in the 2000 county final, but up until last year they had never again been able to even put two titles back-to-back, as ’Haunis began to dominate the hurling landscape.

Once upon a time, Tooreen and Castlebar Mitchels were quite regular county final foes but before now, Castlebar’s last appearance in the decider was all of 21-years ago, which is a quite damning record given the so few number of competing teams (four at present).

Mitchels were beaten by Tooreen in that 1998 encounter, 1-12 to 0-7, and they also lost the 94’ and ’95 finals to the same opposition, and another five finals in-a-row, again all of them to Tooreen, between 1981 and ’85, by margins that ranged from five points in the first year to fifteen points in the fifth. The odds on anything changing this time around seem extremely slim.

Hurling devotees of a neutral nature will hope first and foremost for a competitive game but you fear they may be disappointed; it’s far too early to assume that Tooreen are in the early throes of regaining a former dominance that resulted in 21 titles in 23 seasons from 1978 to 2000, but there’s a chasm that for now Mitchels appear unequipped to bridge.

Tooreen and Castlebar Mitchels met in Round 3 of this season’s Mayo SHC at Adrian Freeman Memorial Park where home side Tooreen ran out 5-26 to 0-12 winners. The teams and scorers were as follows:

When Tooreen won their first ever title in 1966, the fledgling outfit from East Mayo were one of 12 (yes, 12!) different clubs to have won the Mayo senior hurling championship in 24 seasons.