John is a master of the art of iron excellence 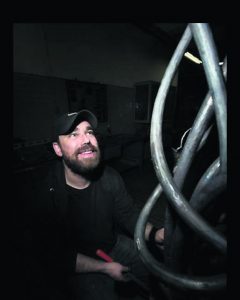 John, whose family ran Hogan’s Bar in Ballina, completed his Leaving Certificate at St Muredach’s College in 1998 and enrolled in a new course in traditional ironwork in Belmullet.

He spent the next few years working for a Dublin firm that specialised in architectural ironwork, creating bespoke staircases, gates etc.

In 2005, John returned to Mayo and set up his own business, Iron Excellence, at the old Asahi site just outside Killala.

The ensuing recession was a struggle but business has picked up a lot in recent years, thanks to John’s versatility which means he can take on everything from architectural ironwork to restorations.

Lately, however, he has been focusing more on sculptural ironwork. He has created a number of large-scale public artworks and has also been commissioned to create prizes for prestigious events like the annual IMRO Awards as well as presentations for the likes of former Taoiseach Enda Kenny and the award-winning producer David Shaw-Smith who created the famous Hands TV series.

John had three sculptures in this year’s Bloom garden show in Dublin including the butterfly-themed work that featured on a recent edition of Room to Improve.

John explained that the butterfly appealed to him as it is highly symbolic to many people, representing themes of the soul, change and even reincarnation.

On Room to Improve, Nigel and Frances Coffey, from Co Wicklow, whose home was being refurbished, looked at two different sculptures and were particularly moved by the symbolism of John’s piece which is now a beautiful centre-piece in their garden.

Frances told show presenter, Dermot Bannon, that it was the “icing on the cake” to have such a meaningful sculpture that – for them – symbolises their departed loved ones.