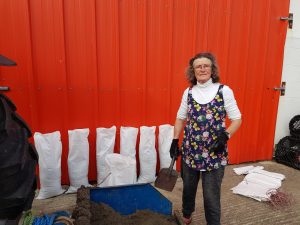 Rhoda Twombly prepares for the predicted impact of Storm Lorenzo

The gail-force winds of Storm Lorenzo were 30 km/h less than Met Éireann had predicted for the West Coast.

Overnight winds and rain caused no significant damage, according to Mayo County Council, making fallen trees, strewn branches and debris were the extent of the issues the council had to deal with the morning after.

The predicted floods and coastal battering did not materialise and, although electricity was lost in thousands of homes, ESB network crews restored all power by late Friday afternoon.

Some people joked online that Lorenzo was anticlimactic; others criticised Met Éireann and the media for over-hyping its potential impact.

However, Rhoda Twombly (62), one of only three full-time residents of Inislyre Island, felt nothing but relief.

“It was nasty enough out here around three and four o’clock in the morning. I certainly wouldn’t have been walking down the road here yesterday,” she told the Western People.

“But, we have seen worse and I expect we will see worse again this winter. I am taking this one as a practice run.”

Originally from New Jersey in the United States, Twombly moved to the tiny island off the Westport coast some 20 years ago upon meeting her partner Joe, a skipper born and reared on the land they now both call home. Their only neighbour, is Joe’s sister Sheila.

Preparations for Lorenzo began two days beforehand, with a few dozen sandbags filled to weigh down gates and boats.

Having lost her boat in a Stephen’s Day storm some years ago, she was not taking any chances with the Status Orange warnings.

But despite being surrounded by the Atlantic Ocean, the islanders did not even lose electricity, and all structures were fully intact come morning.

“We were very fortunate,” she said, adding that the biggest inconvenience was having to take her car- which was parked in Rosmoney on the mainland- to be cleaned as it was covered in mulch.

However, Twombly said she would always choose to err on the side of caution, and she is grateful that the authorities took heed of its potentially devastating impacts.

“I would be nervous of anyone who predicts the weather too confidently. Mother Nature has a way of kicking you in the backside when you get too smart,” she said.

Watching Ireland AM on Friday, the morning after the storm, she said she was “really annoyed”.

“There were people saying the weather forecasters had gone overboard with the warnings, but you are always better to be safe than sorry. The forecaster had their very best guess,” she said.

“I am of an age now where beyond being frightened of things. I just want to be prepared,” she said, adding: “We respect nature, not like the wind-surfers and swimmers spotted out.”

While, she, Joe and Sheila had a lucky escape with Lorenzo, Twombly does worry about their future on an island that is experiencing more and more storms.

“So long as we are physically able to stay here, we will. We can prepare only so much, but if it is happening constantly we will have to see.”