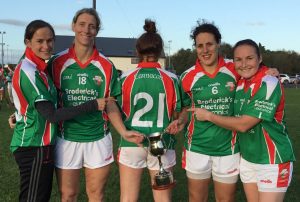 Carnacon’s dominance of Mayo continued on Saturday as they comfortably saw off the challenge of Moy Davitts, to make it 21 titles out of the last 22 Mayo senior ladies football championships played, and their twentieth in-a-row.

From early on it looked as if there was only going to be one winner, as Moy Davitts simply weren’t clinical enough and so therefore struggled to build any kind of momentum. The West Mayo side, on the other hand, were far more ruthless and this combined with a defensive unit at its miserly best, helped to propel them to victory.

Moy Davitts were handed two good chances to settle any early nerves but Niamh Kelly uncharacteristically fired wide on both occasions. Kelly’s inaccuracy was about to be punished in the harshest of fashions, as a well-worked Carnacon move saw Natasha Beegan played through on goal only for her shot to be denied by Emma Galligan. The loose ball was seized upon by Erina Flannery who fired to the back of the net.

Grace Kelly did respond with Moy Davitts’ opening point but that was quickly cancelled out by one from Amy Dowling before the Carnacon centre-forward then slotted over from distance, to leave her side four ahead. A clever one-two between Kelly and Fiona Doherty did allow the latter to pull a point back but Dowling’s third point in-a-row, from a free, again nullified it.

The Green and Red were starting to motor and when Fiona McHale picked out Aoife Brennan on the edge of the square, she raced in, before arrowing home goal number two. A point from Sandra Hall did cut the gap to six points but Moy Davits received a setback when they lost their captain Stephanie Loughney to injury.

The second quarter was somewhat more lacklustre but a single from Brennan, sandwiched between a brace from Dowling, meant Carnacon were nine points clear as half-time approached. The Red and White did manage to narrow the gap slightly however, as Grace Kelly converted a free in the dying embers of the half.

Moy Davitts needed a strong start to the second half but it was their rivals who all but ended the contest in the third quarter.

A slick move involving Flannery, Beegan and McHale, saw Brennan pop one over, before moments later it was almost a case of déjà vu, as Flannery and McHale set Brennan up for a second point.

The West Mayo side were then dealt a blow as Beegan was sent to the sin-bin for a heavy tackle but Moy Davitts failed to capitalise on their numerical advantage. In fact, Beegan was only off the field a number of minutes when Carnacon grabbed their third major. A long ball in was expertly claimed by Brennan and she rounded Galligan before poking the ball into the empty net.

The introduction of Cora Staunton, making her first appearance after a double leg fracture sustained earlier this year in Australia, drew the largest cheer of the day, but it was business as usual for the 11-time All Star who with her first touch dissected the posts.

Fiona Doherty eventually got the Moysiders off the mark in the second half but her point was cancelled out by one from Brennan. Niamh Kelly and Martha Carter then traded scores before Moy Davitts enjoyed arguably their best spell of the game, as they went in search of goals.

First, Grace Kelly was unlucky to see her palmed effort sneak just over the crossbar before an excellent run and shot from Doherty drew an outstanding, one-handed save from Michelle Higgins.

The final score of the game came from a Natasha Gaughan free, but it was barely even a consolation as Carnacon now look towards conquering Connacht.