Jamie has landed in Crossmolina

Two local women had the honour of being among the first locals to bump in to movie star Jamie Dornan who arrived in the area this week to commence shooting on the movie “Wild Mountain Thyme”. 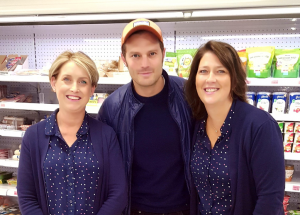 Phil Bourke and Laura Mulligan, who work in Deel Medical Centre in Crossmolina, were picking up a coffee in a local shop last Wednesday when they met the star who is famous for his roles in such productions as the “Fifty Shades of Grey” series of films, “The Siege of Jadotville” and the TV series,”The Fall”.

Phil told the Western People that they were blown away by how humble and handsome Jamie is in real life.

He was doing some shopping when they spotted him and was very nice and chatted away to them both, saying he had spent last weekend playing golf with his father in Co Donegal.

He told them he had visited Mayo once before as a child and that the local people have been really nice to him since he arrived to start working on “Wild Mountain Thyme”.

Jamie explained that he regularly flies into Ireland West Airport Knock as his father has a holiday home in Connemara and he likes to spend time there.

It is understood that his co-star, Emily Blunt (whose movie credits include “Mary Poppins Returns” and  “A Quiet Place”) has also arrived in Mayo and is reported to have been spotted already in Dunnes Stores in Ballina where she kindly autographed a child’s jumper.

The filming of “Wild Mountain Thyme” will continue in the Crossmolina and greater Ballina area for the next five weeks or so.

Based on the Broadway stage play “Outside Mullingar” by the Oscar-winning screenwriter, director and playwright, John Patrick Shanley, “Wild Mountain Thyme” tells the story of lovers Anthony (Dornan) and Rose (Blunt) who get caught up in their families’ feud over a plot of land.

It is understood that at least three houses in the Crossmolina area will be used to shoot scenes for the film while Leonard’s Pub in Lahardane is also reported to be earmarked as a location  for some scenes.