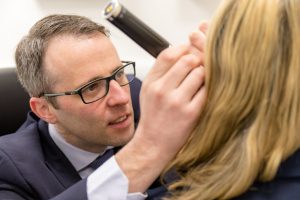 Ballina’s Peter Maguire has been named Ireland’s Audiologist of the Year.

Ballina’s Peter Maguire has been named as the top hearing professional in the Republic of Ireland as part of a search for Europe’s best audiologist.

Peter, who runs The Hearing Company in Castlebar, has been awarded the national title of Audiologist of the Year 2019, for the Republic of Ireland.

He will now compete against other audiologists from France, Germany, Spain, the Netherlands and the United Kingdom for the coveted title of European Audiologist of the Year, which will be announced on October 16.

Peter’s nomination is a truly international affair, having been penned by Michele Reilly who lives in Clapham, London and was moved to write the entry on behalf of her mother, a retired nurse with severe hearing loss who lives in Ireland.

Michele described her mother’s feelings of isolation as source of worry for all the family: “Despite using hearing aids, my mother struggled to hear and carry on a conversation. It greatly saddened her that she could not speak with her grandchildren in any depth.”

Dissatisfied with her hearing aid performance and due for an upgrade, Michele’s mother sought help from Peter.

He conducted a thorough assessment of her hearing and prescribed a new pair of hearing aids. In order to ensure that his elderly patient was able to get the most from these, Peter also arranged for her landline telephone, laptop and television to stream directly to her hearing aids so that she can hear comfortably on the telephone, Skype her children and grandchildren abroad and enjoy her favourite television programmes again.

Michelle wrote in her nomination that Peter Maguire had been steadfast in his determination to find a transformational hearing solution for her mother.

“Throughout the process he provided my mum with unwavering support, seeing her at the last minute, calling out to her home on more than 10 occasions. He really understands the importance of hearing to people living alone, where it keeps the brain active and engaged with stimuli to prevent cognitive decline, and is key to preventing loneliness and isolation. He genuinely cares about my mum’s needs and has worked tirelessly to find a tailored amplification solution that works for her. He is an ideal role model for junior audiologists.”

Jamie has landed in Crossmolina