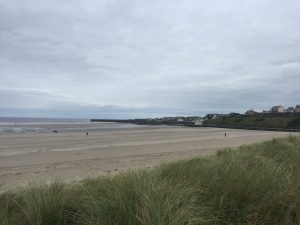 Enniscrone Beach on Wednesday afternoon- the calm before Storm Lorenzo

The sea lay flat, the dunes still, and the wind turbines turned at a sluggish pace on Wednesday afternoon in Enniscrone, Co Sligo. It was the calm before the storm.

Sean Morrison and his colleagues were out dismantling signs on Enniscrone Beach, an activity they do every winter but one he chose to do a little earlier this year, ahead of Storm Lorenzo, as they “could take a beating,” he said.

Mr Morrison expects he will be back at the beach tomorrow (Thursday), installing timber planks on the walkway behind the dunes in the hope these might stop any large waves from spilling over.

“There is not a whole lot we can do to stop the waves because the area is too big,” he told the Western People, adding: “We can do little bits here and there with sandbags, but that’s about it.”

A Status Yellow warning will be in place across Co Sligo from Thursday morning, although the coastal town of Enniscrone is only a few kilometres outside the Status Orange boundary, which affects Mayo and five other counties along the western seaboard. Met Éireann has also advised that an orange warning could be extended to cover the entire Northwest region as the storm approaches.

As a general services supervisor for Sligo County Council, Mr Morrison is frequently involved in clearing up the aftermath of extreme weather events. Just a few weeks ago he received a call in the middle of the night to come down to the town and help drain a flooded home after days of heavy rainfall.

“I don’t mind the rain so much- people are prepared for that- but it is the gusts of wind that I find worrying. Wind has no mercy,” he said.

Envisaging the impending wrath of Lorenzo, Mr Morrison added: “I just hope it is not as bad as they are saying.”

Just a few metres higher than sand-level, Kilcullen’s Seaweed Baths has a direct view of the bay making it a potential target for unruly waves.

Owner Christine Kilcullen recalled the damage done to the building when a storm brought in a foot of seawater some 30 years ago. On the wall behind the reception, is a photo of a wave reaching up over the building’s roof, although this particular instance didn’t do the place any harm, she said.

“It was amazing. The power of the sea is something else,” she added.

As for Lorenzo, Ms Kilcullen is “not too worried”.

“I probably will hold off on my daily swim in the sea, but I don’t think it will be too bad as we are facing Northwest,” she said.

“It could well harm us, but there is nothing we can do about it. There is no point in getting any more white hairs over it,” she added.

Councillor Joe Queenan said he would be “very concerned” if Sligo was to be hit with an orange warning as the town is “very exposed”.

“Nobody knows at this stage how it is going to affect us here. It seems it might hit lower down, but the storm could change and do a lot of damage to us here,” the Independent Councillor said.

Recalling a “number of instances” where people decided to go for a dip during stormy weather, Cllr Queenan said: “I hope nobody will be going out swimming or surfing because people have had to be rescued by the emergency services in the past.”

He added: “I know it can seem tempting from a surfing point of view, but it could be very dangerous.”

In a statement, the council warned that Storm Lorenzo is expected to produce “significant swell, high waves and sizeable storm surges” which could lead to coastal flooding and property damage.

The council requested that residents check on elderly neighbours and charge phones in advance in case there is a power outage.

The crisis team will meet again on Thursday and update constituents if needed.

Irish Water confirm cause of pollution at Enniscrone beach

Bathers warned not to swim at Enniscrone pier