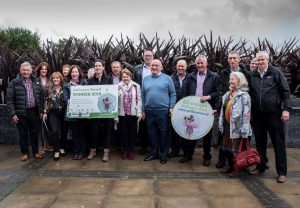 A concerted effort to assist pollinating insects in the town of Belmullet has been recognised with a special Tidy Towns Award.

The winners of the 2019 Tidy Towns Awards were announced in Dublin last Monday, September 30 where Belmullet was declared the winner of the regional Pollinator Award.

The Tidy Towns committee in Belmullet have made a determined long-term commitment to help pollinators by managing their public spaces in a pollinator-friendly way.

The committee’s endeavours have also involved raising public awareness of the town’s biodiversity and of the importance of pollinators by working with local schools and groups like the Beavers, Scouts and ICA as well as local businesses and by coordinating competitions.

Ireland has 99 species of bees and one third of them are currently threatened with extinction due to a reduction in food sources (wildflowers) and safe nesting sites.

The All-Ireland Pollinator Plan was launched in 2015 to work with communities, businesses, parks, schools and farms to make an Ireland where pollinators can survive and thrive.

Cllr Brendan Mulroy, Cathaoirleach of Mayo County Council, remarked of Belmullet’s win: “Tidy Towns groups are the unsung heroes of the country. As a local authority, we recognise this. We also recognise that the Tidy Towns competition has wholeheartedly embraced work to support pollinators, including the special Local Authority Pollinator Award.”

Did you hear the one about the 13 Mayo men who decided to cycle to the top of Mount Everest?

Funding boost for some of Mayo’s key maritime facilities