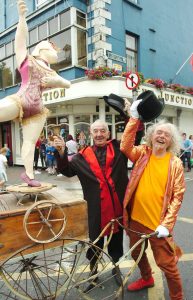 Street Artist Killian Rogers and Ballina’s Ray Collins entertain the crowds during the Heritage Day that was run as part of the chamber of commerce’s Ballina Street Festival last July. Pic: Henry Wills.

The town of Ballina will have a festival in July of 2020 but it’s not clear just yet what that festival will be or who will be running it.
The AGM of the town’s long running Salmon Festival took place in Ballina Manor Hotel last night, Monday, September 30, where current directors faced some tough questioning from the attendance in relation to their decision last May to postpone the 2019 Salmon Festival for a year.
It was also revealed that Ballina Chamber of Commerce has proposed to take over the running of the Ballina Salmon Festival going forward.
Louise Gilmartin, who is one of the festival’s directors, explained that a scoping group had been set up following last December’s EGM to assist the board in planning the 2019 festival.
Great progress was made but in the absence of a chairperson and the lack of required manpower and resources to stage the calibre of festival the town deserved, the decision was taken in May to postpone the event.
Ms Gilmartin paid tribute to Ballina Chamber of Commerce for stepping into the breach and staging the Ballina Street Festival during what would have been Salmon Festival week last July and to all the other local organisations and volunteers that had helped to realise that event.
She said work has already gotten underway to plan for the return of Ballina Salmon Festival in July 2020. Some of the current directors will be stepping down but locals are urged to come out in force and get involved in whatever capacity suits them.
Local man Terry McCole was critical of the manner in which the postponement had been announced earlier this year, saying it had compromised the plans of many people who had arranged their holidays around the Salmon Festival taking place last July.
He said he was concerned that if there was not a sufficient level of commitment, know-how, belief and vision among the board of directors the event may suffer the same fate in 2020.
Ms Gilmartin said the board had been mistaken to try to operate in the absence of a chairperson last year. That error could not be repeated.
Paul Regan, Ballina Chamber of Commerce, said he was a little surprised that the AGM agenda did not include reference to chamber’s proposal to take over the running and financing of the festival:
“We had proposed that because of the difficulties you (the board of directors) are experiencing, you would give the festival to us. We have the manpower, the will and the backing of the business community,” he explained, revealing that the chamber would be appointing Mags Downey-Martin as the full time events co-ordinator for Ballina. All of this would serve to secure the future of Ballina Salmon Festival.
Ms Gilmartin replied that the board had resolved to proceed with the AGM and see if they could appoint sufficient new directors and a chairperson to allow them run the 2020 festival.
If not they would revert to the chamber’s offer. She added that any members of the chamber would be welcome to join the festival’s board or become chairperson of the event.
“We have to do this in a step-by-step process,” she stressed.
Three members of the scoping group established after last year’s EGM volunteered to join the board of directors and it was resolved that the board would meet to determine how the festival will proceed:
“Either way there will be a festival in 2020. That is one positive we can take from this meeting,” Ms Gilmartin concluded.

‘It’s up to the politicians’: Council urged to consider John Hume Day for Mayo