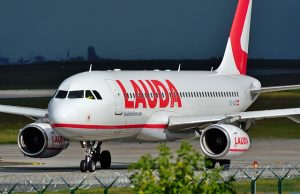 Austrian airline Lauda has selected IWAK as its second only Irish destination.

A new EU route is expected to be announced for Ireland West Airport tomorrow (Tuesday).

Austrian airline Lauda has selected the Mayo airport as its only destination in the country apart from Dublin.

Lauda’s CEO Andreas Gruber will be at the airport tomorrow afternoon with news of the new route. The low-fare airline, which is part of the Ryanair Group, will have seats on sale on www.ryanair.ie immediately. The airline has announced a number of new routes in 2019 and is expected to carry 6.5m passengers to 90 destinations in 30 countries.

The news comes just weeks after Ryanair announced it will not be operating flights to Lanzarote or Tenerife in early 2020. The airline is closing its bases in the Canary Islands and, as a result, the services to both destinations will cease to operate from January 9 to March 29 next. It will see the airport lose approximately 7,000 passengers but there are hopes the flights will resume later in the year.

In more positive news, Ryanair’s Faro base has been saved, meaning that flights to the popular Portuguese destination will continue from Ireland West next year. The airline has already committed to operating 11 routes from the airport next summer. Seats on some April to October services will be on sale from next week with peak season routes on sale in the coming weeks.

2019 looks set to be a record year for the airport with 800,000 passengers expected to pass through the doors.