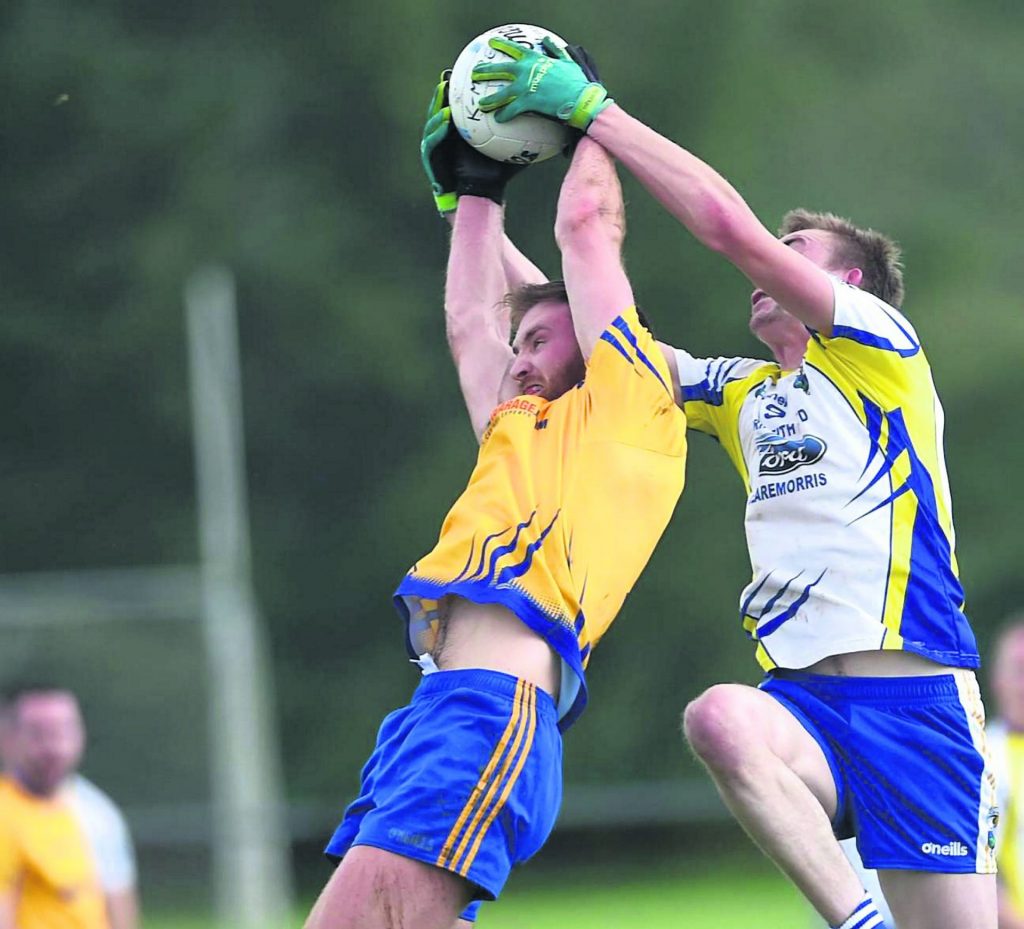 Knockmore’s Shane McHale and Hollymount-Carramore’s Michael Sheridan contest the ball at midfield during the recent meeting of the teams in Round 3 of the Mayo SFC. Both teams are in action again next weekend. Picture: David Farrell Photography

With 36 goals, four converted penalties, 520 points — and 179 of those coming from frees or 45s — the group stages of the Mayo senior football championship were productive for some of the main target men who will aim to carry their form into next weekend’s quarter-finals.

Scoring statistics can be incredibly deceiving over the course of three games, as different factors such as weather conditions and the strength of opposition can skew figures in favour of one team over another.

Nonetheless, reflecting on the 24 matches played during the course of the opening three rounds of the Mayo senior football championship, there is a lot we can learn heading into Saturday and Sunday’s next phase of the competition.

In terms of sheer scoring prowess, you can look no further so far this season than Breaffy. They hit an impressive tally of 2-49 in their opening three games, with 1-35 of that coming from play. For context, that’s four points more from play than the next best of the qualified teams, Ballintubber (3-25), Ballaghaderreen (3-25) and Davitts (4-22), and a whopping 14 points more from play than was managed by Castlebar Mitchels (0-24) in their opening three matches.

What has been most impressive about Breaffy is not just the quantity of points but the wide range of sources that have provided the scores, with thirteen different players getting in on the action. Two great providers for them have been Liam Irwin (0-17, 7f) and Conor O’Shea (0-8 1f), with Irwin raising more white flags from play than any other player left standing in the senior championship quarter-finals.

Breaffy have also the best defence in the competition and have yet to see a ball hit the back of their net. The only other team to achieve this is, interestingly, their quarter-final opponents Ballina Stephenites. Ballina came through a tightly contested group of death and possess a number of talented Mayo panellists in Evan Regan (0-13, 6f) and Ciaran Treacy (0-7, 5f). They will be delighted with not only the performance of these stars but with how players like Sean Regan and Conor McStay stood up and were counted when it mattered, in particular in their crucial group decider with Westport, scoring 1-2 and 0-3 respectively.