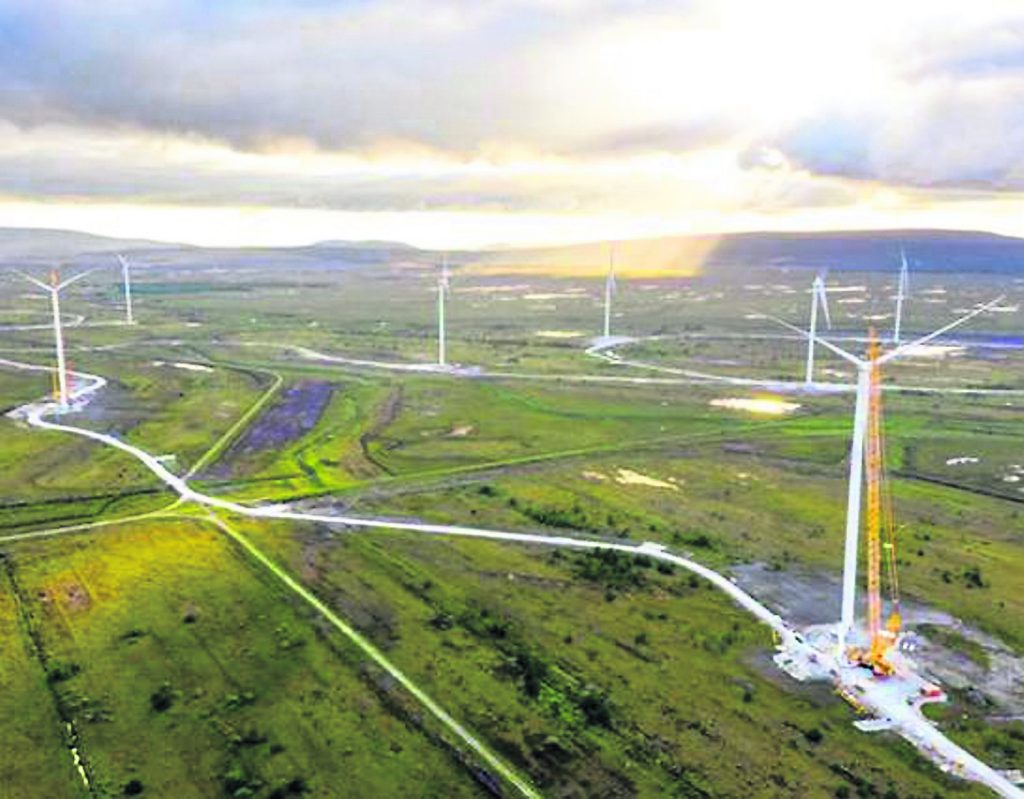 Oweninny Wind Farm pictured at dawn on July 2 last as the construction phase of the multi-million Euro project drew to a close.
Fotoware

After 16 years of planning and development the first of the Oweninny turbines are turning, Orla Hearns reports

It’s almost 20 years since the iconic cooling tower of the ESB’s Bellacorick Power Station in north Mayo was pulled down.

But in recent weeks a new vista on the skyline has replaced the gaping “nothingness” left in the wake of the decline of those industries that, combined, provided employment for hundreds of local people between 1962 and 2005.

The first part of the Oweninny Wind Farm has just been completed and as the developers — Bord na Móna and ESB — proceed to the electrical commissioning phase, the turbines’ slowly rotating blades symbolise the start of a new era for this part of north Mayo that will move from brown to green energy production and, hopefully, the prospects of improved employment opportunities and social enterprise into the future.

Peter explained that although it’s 16 years since planning permission for the wind farm was first granted (2003) the prolonged delivery of the first phase is reflective of how quickly the technology involved has progressed.

That is physically evident too in the original wind farm that was developed on the Oweninny site in 1992.

At the time it seemed pioneering but, today, its turbines look like toys alongside the sleek lines of the recently installed Oweninny ones.

Crossmolina native, Paddy Rowland, remarked that, prior to the development of the Bellacorick Power Station and Bord na Móna’s peat harvesting, locals in the area had two choices — emigrate to America or emigrate to England.

“When the ESB and Bord na Móna arrived it brought a huge economic boost to the area by creating employment as well as generating electricity for the State. It also generated a great element of social enterprise in that part of north Mayo.

“It afforded locals the option of not leaving the area, of rearing their families locally and sending their children to school or even college. It also brought people in from other areas to settle in north Mayo and raise families which, in turn, positively impacted local businesses and sports clubs like Deel Rovers.”

“At its peak — in the 1970s — there would have been between 400 and 500 people working across both operations,” Paddy continued. “It was a bridgehead that held the people and the communities together.”

Both operations wound down in the mid-2000s and the impact was visible throughout the extensive hinterland around them.

But that decline has been counteracted ever since advance works were first carried out in preparation for the Oweninny wind farm in 2013; this involved the construction of about 22km of a road network across the wind farm site together with foundations, ducting, etc.

Limerick-based company, Roadbridge, was the main contractor meaning it could continue a presence it has maintained in north Mayo since 2002, having worked on the construction of the gas line and the Corrib gas terminal at Bellanaboy.

The wind farm went into full-scale construction in 2017.

At peak point of this phase, there were 140 people employed on-site at Owenniny. The majority came from the surrounding area while priority was also given, wherever possible, to local contractors and suppliers.

In fact, the Oweninny Wind Farm development is estimated to have been worth a total of €22 million to the local economy to date.

The civil works on the wind farm site were followed by the electrical balance work which involved the development of a new substation and the construction of the grid connection to the original substation at Bellacorick.

Gaeltec Utilities was awarded the contract for these works. Originally established in Killala in 2002, its chief civil engineer is Killala man Rory Hannick, son of the late Sean Hannick, a former Mayo Person of the Year and a tireless champion of western development.

The construction of the turbines themselves followed thereafter and was handled by Siemens; one of the more complex elements of the overall project, it required trial runs of the turbine component haulage from Killybegs to the development site early in 2019 — an operation that could not have been achieved without the incredible co-operation and support of An Garda Síochána, Mayo Co Council and local residents living along the route, Peter O’Hagan stressed.

All of the components were on-site by the end of March and work then began on constructing the turbines which was done on a sequenced basis with cranes of various sizes lifting the tower components in place before assembling and fitting the blades in place in a process known as “star lifting”.

Reflecting on phase one of the development, Peter O’Hagan remarked that the company was extremely lucky to have “the dream team” of contractors and sub-contractors in place.

“The last turbine was put up on July 7. We were bang on programme which — given the scale of this project and the amount of wind you can get on an exposed site like this — was an incredible achievement,” Peter continued.

The completion of the first phase of the Oweninny Wind Farm caps off an investment of €170m in the development of renewable energy in north Mayo by ESB and Bord na Móna. Peter remarked: “This area of Mayo is actually zoned for energy production and it is perfectly set up for that.”

He stressed that the company would commence phase two of the wind farm immediately but cannot do so due to the fact that the national grid must be upgraded in order to accommodate the power that the two phases combined will generate.

But for now phase one is being tested and power is flowing from its turbines into the grid and on to our homes and businesses.

Peter says it’s a significant moment for the project partners that symbolises their ongoing transition from brown to green energy, with both committed to becoming completely carbon neutral in the near future.

The Oweninny Wind Farm will generate minimal employment in comparison to the jobs previously created by the Bellacorick Power Station and Bord na Móna’s peat harvesting but Peter stresses that the jobs will be sustainable ones, best suited to locals who are committed to settling in the area.

In addition, there will be associated operations on-site at Oweninny that will also generate employment and spin-offs for neighbouring towns and local businesses.

Meanwhile, the developers are now focusing their energies on the €3m visitor centre element of the wind farm.

The development will link in with the Western Way and north Mayo’s existing tourism offer and further boost the local economy.

“It’s good to be putting something back into the area,” Paddy Rowland remarked. “It’s great that there will be people working here again and this project will operate for the next 25 to 30 years.”

Preparations are also underway for the administration of the Oweninny Wind Farm Community Benefit Fund.

This will see more than €200,000 of funding made available by the developers every year for community initiatives and projects in an agreed catchment area.

The fund will be administered by Mayo Co Council and overseen by an elected board representing the areas and stakeholders involved and is in addition to the €100,000 or more that was distributed in 2018 to initiatives and projects in Crossmolina, Bangor Erris, Moygownagh, Keenagh and Ballina as part of a separate construction fund.

A similar amount will be distributed from this latter fund again in 2019 to community groups adjacent to the wind farm site and along the wind farm’s turbine delivery route.