From Mayo to the Thames: The Spirit of Granuaile Lives On 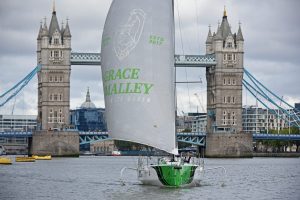 Irish pro-sailor, Joan Mulloy aboard her ocean racing boat, Believe in Grace, having completed a special trip from the West of Ireland to London, retracing the route of her formidable ancestor, Grace O’Malley Irish Pirate Queen who famously met with the Virgin Queen in 1593.

A Westport pro-sailor, Joan Mulloy, has completed a very unique journey. She has followed in the footsteps, or rather sailed in the streams, of her famous ancestor, the legendary pirate Queen Grace O’Malley.

Over 400 years ago, Granuaile sailed along the River Thames to Tower Bridge in London and met with Elizabeth the First at Greenwich in summer, 1593. Many generations on, Joan has retraced the route from Mayo to London, with sails emblazoned with the name, Grace O’Malley Irish Pirate Queen.

As part of this re-enactment, Joan brought a special presentation bottle of Grace O’Malley Irish Whiskey on board with her to commemorate the famous meeting and the mutual respect between the two formidable ladies. The story recalls that Grace gifted a bottle of Irish whiskey to Queen Elizabeth.

The aim of Grace’s trip was to seek ‘clemencie and favour’ from the Queen, who agreed to released Grace’s son Tibbot, restore his lands and gave royal assent for Grace to continue her business of ‘maintenance by land and sea’ without hindrance or interference from the Queen’s governors.

Grace O’Malley Irish Whiskey is supporting Joan in her many sailing and racing endeavours and Joan will represent the brand at events and in a number of special challenges in 2019. The trip to London took 10 days to complete in Joan’s racing boat named Believe In Grace. She reached Tower Bridge on Saturday, September 7th, the birth date of Queen Elizabeth I.