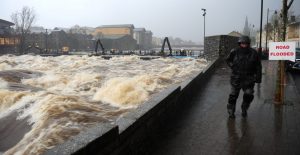 The River Moy’s Ridgepool in December 2015 when over 200mm of rain fell during the month.
Picture: David Farrell Photography

From his back garden in Straide, Martin Sweeney has been recording central Mayo’s weather for over half a century.

Rain, hail, storm or shine, with the help of a few neighbours whenever he was away, Mr Sweeney has maintained a near-continuous daily catalogue of Straide’s weather, reporting his findings to Met Éireann.

In August, the national meteorological service upgraded the Straide station to take automatic readings, so Mr Sweeney no longer sends in his recordings.

“It is the end of an era,” he says, standing in his living room on a cloudy September afternoon.

Newspaper clippings are scattered across the table: one a Western People report on last year’s record-breaking summer heat and another from March 1967 detailing a freak lighting bolt that destroyed a house in nearby Ballyvary.

Although it is the first month his services are no longer required, his logbook, peeping out from underneath the newspaper reports, details August’s climate.

In precise handwriting, he has recorded the temperature of the air, soil, and grass, as well as humidity levels and sunshine, although Mr Sweeney explains Mayo experiences very little of the latter due to the “large number of depressions and fronts from the Atlantic”.

One of his favourite weather facts is that there was nearly as much sunshine on July 2, 2018 (when he recorded 15.7 hours of sun) than in the whole of December 2018, which saw just 16.3 hours of sunshine.

The veteran weatherman began recording rainfall frequency for Met Éireann in 1963, upgrading his site to a climate station some 20 years later.

A postman for 41 years, Mr Sweeney has always had a love for the outdoors and fresh air. He recalls being caught out while doing his delivery round on some “very bad days”.

But there is one day he will never forget: September 16, 1961, the day of Hurricane Debbie, a Category One hurricane that forced him to abandon his deliveries at midday. When the wind increased to hurricane force he could feel the roof of his house “waving up and down”. By 3pm, the winds had settled and he was back out on his bike delivering letters and parcels.

“People should always move indoors when there is thunder,” Mr Sweeney warns. “The most dangerous places during a thunderstorm are high ground, large flat fields, and bogs.

Meanwhile, winter snow is on the decline, with little to no snow recorded since the “very severe frost” of 2010, he says.

Mr Sweeney, now in his eighties, says he will keep recording the weather until he no longer can.

Mayo beaches in ruins after relentless run of winter storms