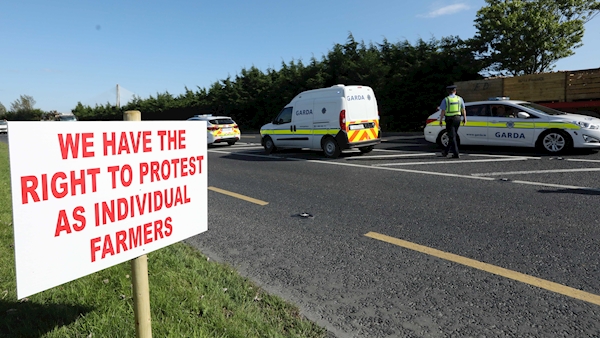 Meat Industry Ireland is claiming that thousands of staff have been temporarily laid off at meat processing plants as the beef price dispute rumbles on.

RTE News report that around 3,000 workers have been let go today after talks aimed at ending the dispute over the beef prices paid to farmers were cancelled last night due to the pickets.

In a statement last night, Meat Industry Ireland (MII) said it would not negotiate with the farmers until the blockades at meat processing plants were lifted.

It said it had “shown good faith” by putting off legal action against the protesters ahead of the talks but insisted it could not enter talks while the protest continue.

“The escalation of illegal blockades over the weekend has been a huge disappointment to MII members,” it said.

“Negotiating whilst illegal and threatening behaviour is ongoing is not compatible with negotiation in good faith.”

Protestors are blockading more than 20 plants around the country as efforts continue to begin talks to resolve the dispute.

It is reported that more than 300 workers at the Dawn Meats plant in Grannagh, near Waterford were laid off temporarily earlier this afternoon.

They said there will be more lay-offs.

MII said the vast majority of cattle slaughtering has already been stopped at plants around the country – with thousands of employees temporarily laid off.

It warned farmers that they will soon find it impossible to sell their animals – with “vital customer relationships” facing significant damage.

The protests have been unofficial since the Beef Plan Movement (BPM) came to agreement with the meat processors on a range of issues.

After those talks, independent farmers continued to picket, calling for talks on pricing.

“I think Meat Industry Ireland needs to come down off their high horse and go back into talks; see how that progresses things,” he said.

“See what we can do to safeguard an industry that is very important to farmers, to meat industry Ireland, to meat factories and to the economy.”