All’s fair in love and Tug of War 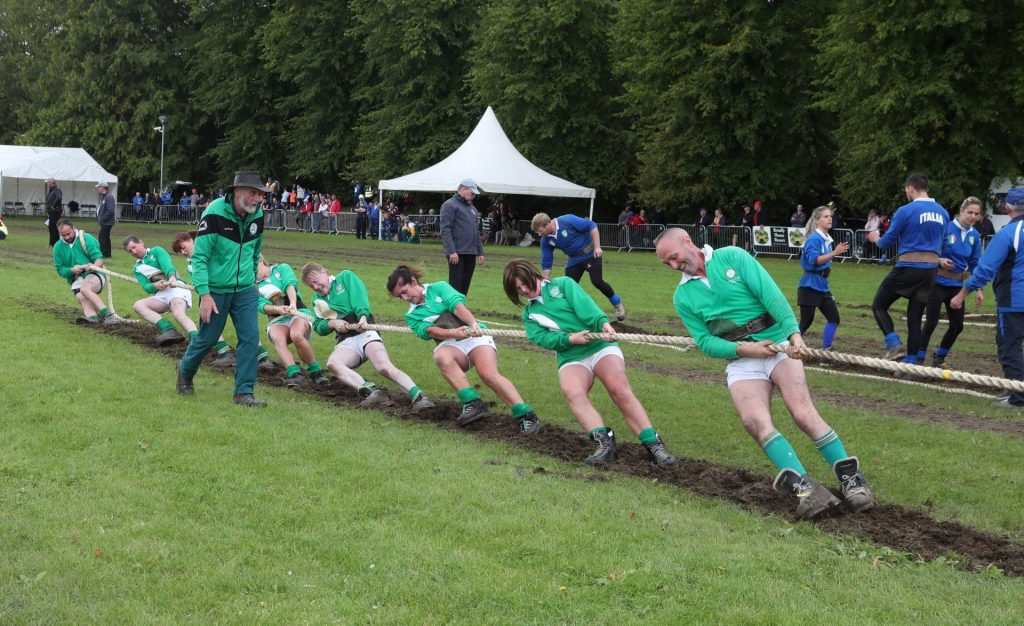 The Irish mixed 580kg team dig in during a match at the European Tug of War Championships in Breaffy on Saturday afternoon.

Eight Germans and eight Swiss gripped on either end of a rope and none of them have moved more than an inch in about five minutes. Suddenly, an almost imperceptible wobble from one of the German boys. The vibrations travel up the length of the rope and a sudden roar goes up from the Swiss. One almighty heave breaks the German resistance and seconds later, the match is over.

Not your average Saturday morning in Breaffy, it’s safe to say, but then there’s nothing average about the show being put on here. It’s the European senior and World junior Tug–of–War championships, events which have brought literally thousands of people from all over the world to Mayo for the weekend.

Breaffy House Hotel, the host venue, sat 1,100 people for dinner on Friday night and hotels in neighbouring Castlebar and Westport are also full to capacity. The competitors have come from 21 different countries all over Europe and from as far afield as Taipei and South Africa.

Out the back of the hotel, a field has been ringed off with marquees and viewing galleries. The ground itself is being churned up on an hourly basis, each match serving as a miniature ploughing session. The competitors plant their boots in the soil and lean back, some nearly horizontal with the strain of the pull.

Preparations for the event have been in motion for months, with a delegation from Breaffy having travelled to Malmo in Sweden all of four years ago to present an ultimately successful bid to host the championships. An army of volunteers, hotel staff and officials from the Tug–of–War International Federation (TWIF), the organising body behind the championships, are working flat-out to ensure a huge logistical operation runs off as smoothly as possible.

In total, over 1,300 athletes are participating in the championships, which are being held in Ireland for the first time since 1987.

The action commenced on Thursday with the start of the open club segment of the championships, where any tug–of–war team could enter the competition and try their luck against some of the best teams in the world. Saturday and Sunday then saw the closed competitions, the serious business between the international-class tuggers.

Competition is broken down into men’s, ladies and mixed teams and is divided along weight categories. The important figure is the collective weight of the eight team members, which cannot exceed a set total of kilograms. The categories range from 560kg to 720kg for the men’s competitions, 520kg to 560kg for the ladies and a single 580kg division for the mixed teams of four men and four women.

Ireland are one of five competing European countries competing (alongside England, the Netherlands, Germany and the Basque Country) to have teams entered in all seven of the divisions.

Running alongside the European senior competition are the World junior (under-18) and under-23 championships, which include most of the same European teams along with South Africa, Chinese Taipei and Thailand. Ireland has teams competing in the junior men’s 560kg and under-23 men’s 600kg classes.

Competition is structured on a round-robin basis, with each team pulling against every team in their weight category. In categories with a dozen teams or more, teams are split into two pools. Four teams in each category advance to the semi-finals, with first in the round-robin pulling against fourth and second against third. The winners pull-off in the final and the losers face off for bronze.

The Ireland 680kg team, which includes Connell Ward of the Knockmore-based Lakehill Club, come within a single point of advancing to the semi-final but fall just short of the mark, while the 560kg, made up of members from the Gortletteragh/Ballygar team, also come up just a single point short of the last four.

On Saturday afternoon there were matches taking place in the junior and senior competitions, with six different pulling zones in continuous use within the arena. While the Swiss and German teams were dueling it out in the men’s draw, the mixed teams of the Netherlands and Sweden were locked in a tense battle in the far corner of the ground.

Matches generally last for ten minutes or so, long enough for one team to gradually wear down the resistance of the other until a decisive pull can be made, but as Anton Rabe, the President of TIFF explained, it’s not uncommon for matches to drag out considerably longer.

“The longest I’ve ever experienced is 57 minutes,” Rabe recalled. “That was in Holland in ‘96. Since then we’ve changed the rules a little bit. Sometimes if there are very big holes in the ground the pull just stagnates. We call that the inactivity rule, so the judge can stop the match and move the teams to fresh ground to complete the match.”

Matches are scored on a point systems, based around the incremental over-and-back of a fixed point in the middle of the rope. There is also a tie-break system in place which takes into account the number of cautions received by both teams for rule violations.

Rabe, a South African, was full of praise for the facilities in Breaffy and the preparation work done by the hotel staff.

“It’s been great. Everything is nice and compact so there are no big hassles, all the facilities are right here on the premises. It’s one of the great places because everything is together,” he said.

“We have our team of officials from the Federation to run the competitions but the local organisers have put everything in place. The arena, the ropes, the PA systems, the stands, all of those things. We came in on Monday and engaged. We have experienced people who know how to run a competition and it’s been great so far.”

Competition was still ongoing on Saturday afternoon before the heavyweight 720kg category began on Sunday. Despite the seriousness of the competition, there was an undeniable carnival atmosphere around Breaffy over the weekend as competitors and supporters from around Europe and world mingled in the late-summer fine weather.

The event was a huge boost for the economy of Breaffy, Castlebar and the surrounding area and everyone in the bumper crowd had nothing but good things to say about the smooth running of the proceedings. The team at Breaffy did themselves proud and it seems safe to say that it won’t be another 32 years before the championships return to Ireland again.

Everything is nice and compact so there’s no big hassles, all the facilities are right here on the premises. It’s one of the great places because everything is together