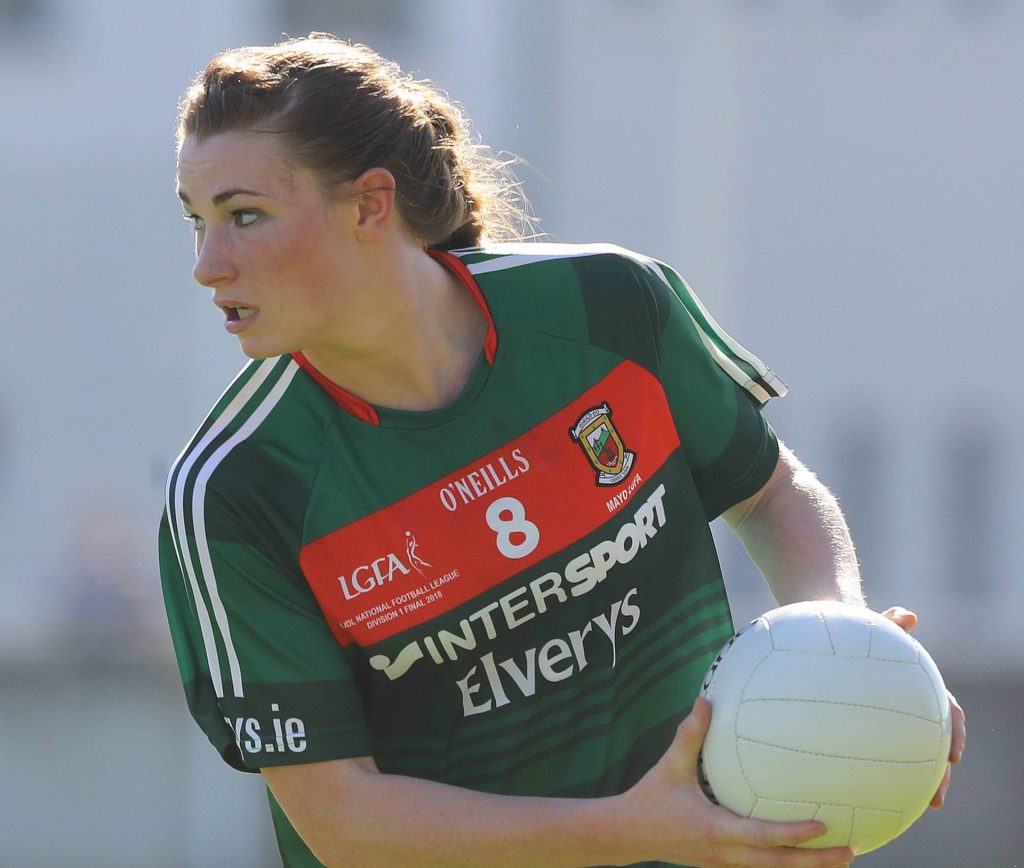 Just twelve months after rupturing her cruciate ligament, Mayo footballer Aileen Gilroy is preparing to venture to the far side of the world to play professionally for North Melbourne in the AFL Women’s League. She spoke with Mark Higgins

Twelve months ago, almost to the day, Aileen Gilroy was coming to terms with the most dreaded of all footballers’ injuries. She ruptured the anterior cruciate ligament in her left knee while captaining Mayo in their All-Ireland quarter-final loss to Galway, the second time she had torn the same ligament, and was getting ready to undergo surgery on her knee and enter into what would prove a long and arduous recovery process.

Wind the clock forward a year though and things are looking decidedly brighter for the 26-year-old. Back to fullfitness, and having made her return in time to start for Mayo in their All-Ireland semi-final in Croke Park two weeks ago, Gilroy is currently preparing to head to Australia to join up with the North Melbourne Tasmanian Kangaroos in the AFL Women’s League for the 2020 season.

She is the fourth Mayo ladies footballer to sign up to play in the AFLW next season, following Sarah Rowe, who is returning to Collingwood for a second season, and Grace and Niamh Kelly, who will play for the West Coast Eagles.

Gilroy, who currently lives in New Ross in Wexford and works as a personal trainer, confirmed terms with the Kangaroos last week and is set to jet off around the middle of October. She will have two months of intensive pre-season to adapt her skills to the new code before the season kicks off in early January.

“I’m really excited about it,” said Gilroy this week. “I had to keep it on the hush-hush because it wasn’t confirmed but when it was all done and word came out it was mayhem, my phone was hopping for days with people saying congratulations.”

The approach from North Melbourne came somewhat out of the blue last May, when Gilroy was still very much in the rehabilitation process after her knee surgery. Most of the ladies Gaelic footballers who sign with Aussie Rules teams go through Cross-Coders, an Australian-based organisation which recruits players from a variety of sports around the world to play in the league. But in Gilroy’s case it was as straightforward as a call from the Kangaroos’ recruitment manager Rhys Harwood, who explained that the club had been keeping tabs on her from afar and effectively invited her to sign.

“I told them about my ACL and said that it probably wasn’t the right time, but maybe in the near future,” recalled Gilroy.

“But I was taken aback because they knew fully about my knee. They asked me about my check-ups and my rehab, keeping up to date to make sure my knee was going to be okay. They even passed on a programme of exercises I could do to help the rehab, even if the move didn’t go through.”

The diligence paid off for North Melbourne. Gilroy returned to competitive action for Mayo as a substitute in their quarter-final win over Armagh, and was put straight back into the starting team by manager Peter Leahy against Galway, and the move Down Under was finalised the following week.

She will be joined in North Melbourne by Mairéad Seoighe, the Galway forward who scored both of her side’s goals in that 2-10 to 2-9 win and is currently preparing for this weekend’s All-Ireland final against Dublin.

“It was weird to be playing against her in Croke Park the last day, we were on opposite teams and now we’re teammates,” said Gilroy of Seoighe. “I’m delighted that she is coming out. We’re going to try to live together too so it’ll be great to have an Irish girl there.”

Gilroy hasn’t been to Australia yet but she won’t lack for support once she gets there; along with Seoighe, her sister Emma has recently relocated to Melbourne.

It’s set to be a steep learning curve for the St Brigid’s clubwoman, who will have just over two months to learn the skills of the new game before the season starts, but it’s one she is relishing.

“I was hesitating a bit at the start but they were sending on details about the club and the set-up they have. Rhys sent on a video of how the girls did last year and he explained how he felt like they were missing two or three players last year to go that little bit further,” she said.

“They obviously thought that I could make the team a little bit better so I jumped at the chance when I heard that. They obviously have belief in me and they did their homework without me even knowing, so I knew they were interested in me when they were going to that much effort.

“I’ve been playing football all my life, but things like the tackling is going to be completely different, even just the ball shape. But again, I’m hoping that I’ll pick it up quickly and earn a spot on the team.”

The statement from North Melbourne announcing Gilroy’s signing highlighted her ‘power, speed, and ability to break the lines off half-back and through the midfield,’ so it seems safe to assume that she will be asked to play a similar centre-field position to the one she plays for Mayo.

“I think that’s what they’re hoping I’ll do,” she said, “but if I get out there and they think there’s a better position for me, I’ve no problem with that either. It’s a whole new game for me and a whole new challenge so we’ll have to wait and see when I get out there.

“I’m just going to try to take it in my stride. We’ll see what they think; obviously they know best. Wherever they want to play me I’ll be happy.”

The life of a full-time professional athlete also affords opportunities to dedicate time to mastering the skills of the game that amateur players in Ireland simply don’t have.

“Mairéad is doing the same thing. If the two of us feel like going out and doing a bit of kicking practise or whatever, we’ll have that opportunity. The Aussie girls will be going to work and then coming out for training, but we’ll have the whole day to be practicing or just messing around with the ball,” said Gilroy, adding that the Kangaroos have sent an Aussie Rules ball over by airmail to give her a bit of head-start.

You really can’t say that Gilroy hasn’t earned the opportunity. Hers has been a long and difficult road back from the cruciate injury, one which saw her miss almost the entirety of Mayo’s 2019 season. Her relocation to Wexford also meant that once she was able to resume training around June, she was travelling up and down from one corner of the country to the other every weekend to bring herself back up to speed.

“My knee had been sore for nearly two years before that so it was always a bit of struggle for me,” Gilroy said of the injury. “In that Galway match, I just turned and I could hear a pop and I knew it was gone fully. But by stage it was hanging on by a thread anyway.

“It was really, really tough. It gave me the opportunity to come down to Wexford and see if I liked it or not. But when you’re this far away from the girls and you see them progressing through the league and coming up to championship, you do definitely get itchy feet.

“Peter was so good, he always kept in contact with me, asking how my progress was going. It was always my intention to come back this year but at one stage I didn’t think I was going to make it back. The second time around doing an ACL you’re a little more cautious. I thought I’d be back as quickly as I was the first time, which was eight or nine months, but I had to pull back and be smart about it.

“So it took me ten months really to come back. I started training with the local club down here and then I started training with Mayo. It was tough because all of the girls were flying fit. They’d been training since December last year, when I was just starting my rehab. So it was a tough slog to get back up to those levels but it was definitely worth it.

“It someone had said to me twelve months ago: would you take starting an All-Ireland semi-final against Galway at Croke Park after the knee injury, I would have been jumping at the chance. It was nearly emotional at one stage, because you’re at the home of football and you know the work you’ve done over the previous ten months.

“This time last year I was going in for surgery, and for two weeks after the surgery you’re not able to walk. To get from there to starting with Mayo in 11 months… To lose out by a point was heart-breaking but all the hard slog and all the journeys were definitely worth it.”

It was always my intention to come back this year but at one stage I didn’t think I was going to make it back. The second time around doing an ACL you’re a little more cautious