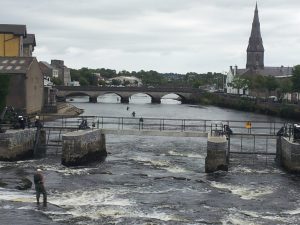 Anglers in the River Moy

Salmon catch numbers are down by almost 20 per cent on this time last year, with a thousand fewer fish hooked by anglers on the River Moy.

Last year, some 5,200 salmon were caught between the start of the season and the end of August, while the tally to August 26 this year was 4,100.

Earlier this year, the IFI predicted the season would match or even surpass last year’s catch, as the Moy had outperformed those in Donegal, Sligo, and Galway in recent years.

However, the drop in catch numbers this summer is likely to have negative repercussions on fishing tourism in North Mayo next year, according to Mr Cooke.

“It should have been a good year for Ballina,” Mr Cooke told the Western People. Although there were a few floods, the weather conditions were good this year, Mr Cooke said, meaning the haul was a “big disappointment”.

The season doesn’t finish until the end of September, but Mr Cooke doesn’t anticipate more than 5,000 as the final tally.

Anglers turned out in similar numbers to last year; it was the salmon that stayed away, Mr Cooke said, adding: “It was a case of people trying and failing to catch fish.”

Full story in this week’s Western People. On sale now locally or purchase our digital edition by clicking the green e-paper icon on our website home page  www.westernpeople.ie