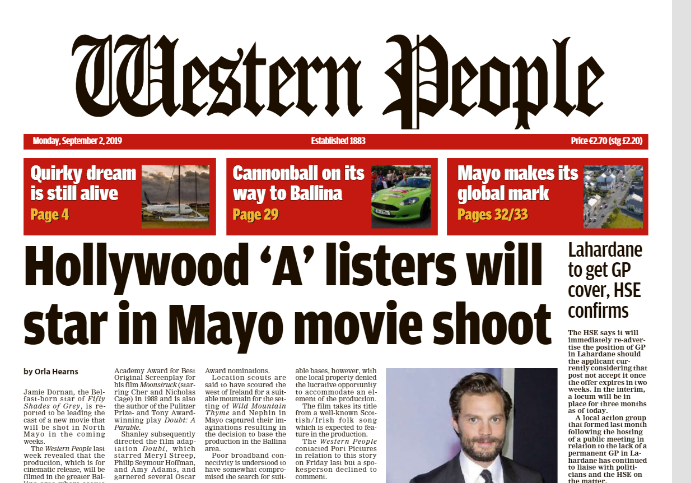 “Fifty Shades of Grey” star Jamie Dornan is reported to be leading the cast of a new movie that will be shot in north Mayo in the coming weeks.

The Western People last week revealed that the production – which is for cinematic release – will be filmed in the greater Ballina area where scouts have been seeking out suitable bases in conjunction with Mayo Co Council’s Film Mayo for a number of weeks.

It is understood that the production is called “Wild Mountain Thyme” and will feature Dornan and Holliday Grainger (“Animals”) as fated sweethearts whose families are fighting over a plot of land that separates their farms.

Port Pictures, which was founded by Westport woman Martina Niland, has been involved in developing and producing the film.

The story is reported to have been adapted for film from the Broadway stage play “Outside Mullingar” by American playwright, screenwriter and director John Patrick Shanley.

He won an Academy Award (Oscar) for Best Original Screenplay for his film, “Moonstruck” (starring Cher and Nicholas Cage) in 1988 and is also the author of the Pullitzer Prize and Tony Award-winning play “Doubt: A Parable”.

Full story in this week’s Western People. On sale now locally or purchase our digital edition by clicking the green e-paper icon on our website home page  www.westernpeople.ie