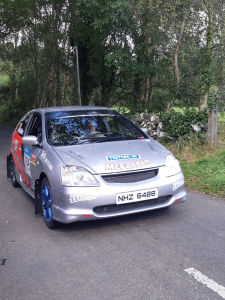 Keith and Sara McFadden from Mayo in action during the Galway Summer Stages Rally.

Club members were out in force for the event, which was held in Gort, with 10 competing Mayo cars and a large team of marshals and officials assisting.

This year’s route consisted of three loops with three stages in each.

In class 3 Keith McFadden, with Sara McFadden on the notes, swapped their famous Renault Clio for a Honda Civic Type R.

In class 7, Paul McGee was co-driving for Ian Barrett in a Subaru S12B – the same car that the late Manus Kelly won the Donegal International Rally in on three occasions between 2016 – 2018.

In class 11R, John McCarthy was co-driving for Florian Niedermueller in a Toyota Corolla while Belcarra’s Barry Cuffe – with Shane O’Brien on the notes – was competing in a Ford Escort Mk 2.

The weekend also marked a return to rallying for Castlebars’ Gerry Casey who, with co-driver Jane Collins, was competing in class 13R in a Ford Escort Mk2.

John Warren and Ruthann O’Connor were also out in action in this class in their Toyota Corolla Twincam.

Shrules’s Jason Murphy, with Matthew Murphy co-driving, was out in a class 16 Honda Civic.

Also competing in a class 16 Honda Civic was Derek McCarthy who was co-driving for Stephen Reynolds.

In class 13R John Warren and Ruthann O’Connor took the honours in their Toyota Corolla Twin Cam, having taken the lead from the first stage and maintained it comfortably throughout the event. They took 1st place in class and were 20th overall.

Paul McGee – co-driving for Ian Barrett – had a great day out and the pair took 3rd overall in the rally in their Subaru S12B.

The day went very well for Keith and Sara McFadden in their new car. They were 3rd in class 3 for most of the day up to stage four when they moved up to 2nd and held that position until the finish, ranking 71st overall.

In class 11F, David Healy and Stephen McGing had a good day out in their Honda, finishing 8th in class and 41st overall.

Gordon Nimmo and co-driver Crystal Culkeen were also competing in class 11F and finished 14th in class and 83rd overall.

In class 11R Barry Cuffe and Shane O’Brien had a good start to the day. They were in 5th place after the opening stage and quickly moved up to 3rd after stage two.

They dropped a few places after a slight off and some damage to fix on the car but recovered and finished 4th in class and 46th overall.

Also in class 11R was John McCarthy, co-driving for Florian Niedermueller. They were unfortunate not to make it to the end of stage one due to gearbox problems which put them out of the event.

In class 16 Derek McCarthy, who was co-driver for Stephen Reynolds in a Honda Civic, was in 3rd place after the first loop. The pair maintained their position and improved on it to take 2nd place in the juniors.

Jason Murphy and co-driver Matthew Murphy were ranked 11th after the first loop and made up two places to finish 9th in class.

On Friday and Saturday, August 23 and 24 Foxford’s Seán Hynes travelled to the Ards Peninsula in Co. Down to compete in the Formula Sheane Championship at the Kirkistown Motor Racing Circuit.

After a good start on Friday Seán qualified for 3rd on the grid for the two races on Saturday. He was forced out of the first race when a broken ball joint impacted his steering but he recovered well and went on to take 2nd place in the second race with just 0.1 second separating him from 1st place.

The club’s final event of 2019 takes place on Sunday, September 9 when Mayo Motorsport Club Autocross takes place in the Valley.

Entry forms and regulations are now available on the club website www.mayomotorsportclub.com