Plenty to play for after dramatic weekend 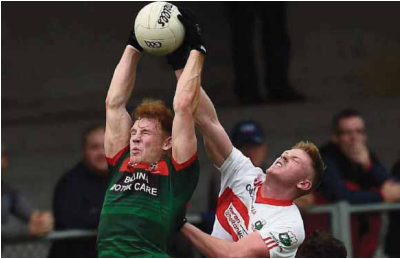 The second round of the Mayo senior football championship produced its fair share of twists and turns over the course of the weekend with some eye-catching results around the county.

As things stand, reigning champions Ballintubber, last year’s beaten finalists Breaffy and the Group 4 pairing of Ballaghaderreen and Belmullet are the four clubs assured of a place in the quarter-finals before the final round of games, with each having picked up their second win of the group stage over the weekend.

On the other side of the coin, Moy Davitts suffered the ignominious fate of being the first club consigned to the relegation play-offs, while Charlestown and Claremorris are also hanging precariously over the edge after their second losses in succession.

One of the most significant results of the weekend was Davitts’ 2-12 to 0-9 win over Moy Davitts in Foxford on Saturday evening. The win not only secures Davitts’ safety in the senior ranks for 2020 but also gives them a decent chance of qualifying for the quarter-finals. They are set for a winner-take-all Round 3 meeting with Kiltane, with whom they are currently locked on two points apiece in the table after the Bangor side fell to a 0-22 to 0-12 defeat in Breaffy on Sunday.

Breaffy are through and look set to top the group; a result of any description in their Round 3 clash with Moy Davitts will send them through as group winners. Moy Davitts will go into the relegation play-offs regardless of how that one goes because the best they can do at this point is to finish level on points with the losers of the Kiltane-Davitts match, but because they have already lost to both of those teams, the head-to-head record will see them finish bottom.

Group 2 is poised on a knife-edge heading into the final round of games with all four teams in with a shout of progressing from the group. Castlebar Mitchels sit top after two games after they overcame Westport in St Patrick’s Park on Saturday evening. Neil Douglas kicked nine points for the 2017 county champions on their way to a 0-14 to 0-10 win.

In the group’s other game, also on Saturday night, Ballina Stephenites and Aghamore played out a tense 1-9 to 0-12 draw.

The results effectively mean that the winners of the two Round 3 games – Mitchels v Aghamore and Westport v Ballina – will advance from the group, while draws would be good enough for Mitchels and, more than likely, the Stephenites.

Ballintubber are through to the quarter-finals after they recorded their second win of the group stages against Knockmore in Clogher on Saturday night, running out 2-10 to 1-8 winners. Their progression was assured on Sunday afternoon when Garrymore and Hollymount-Carramore drew 1-11 to 0-14 in their South Mayo derby.

Ballintubber will top the group regardless of how their Round 3 meeting with Garrymore plays out – only Knockmore can catch the reigning champions on points, and the Abbeysiders have the head-to-head edge over the North Mayo men.

Knockmore will advance alongside ‘Tubber if they beat Hollymount-Carramore in their Round 3 match, while Holly-Carra can also still go through with a win in that encounter. Garrymore will need to beat Ballintubber and hope that Holly-Carra can do them a favour against Knockmore.

Group 4 is clear-cut: Ballaghaderren and Belmullet are through to the quarter-finals, Claremorris and Charlestown are out, and will meet in what amounts to a relegation play-off in Round 3 to decide who enters the play-offs proper. Ballagh’ and Belmullet will meet to decide who tops the group.

Ballagh’ got their second win of the campaign with an East Mayo derby victory over Charlestown on Saturday evening. Andy Moran and Owen Jordan got the goals in their 2-8 to 0-12 win over the Sarsfields, who welcomed Tom Parsons back to club action after his injury lay-off.

In the group’s other game on Sunday, Claremorris suffered a ruinous 2-13 to 0-13 defeat at home to Belmullet, goals from Ryan O’Donoghue and Shane Nallen helping last year’s intermediate champions into the quarter-finals at the first attempt.

They will take on Ballagh’ in the final round knowing the victors will advance as group winners and receive, at least in theory, an easier draw for the quarter-final.