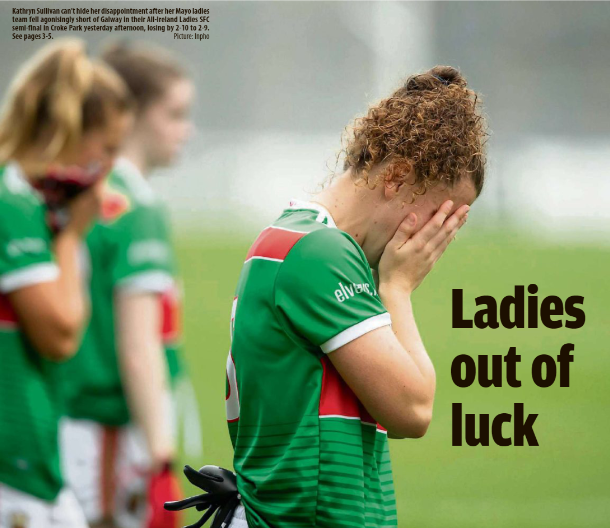 Frustrated, but proud were the overriding emotions from Mayo Senior Ladies Football manager Peter Leahy yesterday evening after his side’s gut-wrenching  one-point defeat to Galway in the All-Ireland SFC  semi-final at Croke Park.

Mayo had been just a kick away from forcing extra-time, with Galway down to 14 players after Olivia Divilly’s sin-binning.

With just over 40 seconds left on the clock Rachel Kearns was ploughing through when a foul was committed by a Galway back and Mayo were awarded a free.

With the clock stopped on 31 seconds, and with a 14 metre free to tie the game, it looked certain that extra-time was on the cards.

But while Kearns was receiving attention from physio Aoife Kerrigan, Mulvihill consulted with his officials, and he handed Galway a free out, after learning that Kearns had double-hopped the ball before being challenged.

After the game Leahy was frustrated with how the game finished – it was his understanding at the time that the call was made after officials had watched TV pictures.

The rule is that when live TV coverage is available, outside of venues where Hawkeye is used, that TV coverage can be consulted when ruling on scores only.

“When you are done outside the rules of the game it is not a great thing,” he said.

“When you pull the two hops, we are told by the fourth official that it was from upstairs by television which is against the rules. The referee didn’t see it, the umpires didn’t see it. The television pulled it up.

“She was fouled four times before she got to hop it twice and he pulls it back for two hops. Which is not in the rule book to be done by trial by television. That is a little bit annoying.”

“The fact that she is fouled down before that was a little bit annoying that he didn’t go back.

“He just put advantage on it it was a definite free from start to finish.”

While Leahy was annoyed with the end to the game, he was hugely proud of their efforts during the campaign, and on the big stage at Croke Park.

“A little bit annoying in that circumstance but I have huge pride in these girls.

“Huge honour they showed today, commitment. Our own destiny was ruled by our amount of wides we had today.”

Three wides inside the first three minutes meant that, despite a dominant start in terms of possession, Mayo didn’t reap their usual rewards.

“Our shot selection was poor. We had too many wides. We also kicked balls straight into the goalkeeper’s hands when we were one-on-one when it was a much easier situation to put it across the box. We weren’t clinical.

“We owned the ball. Without sounding facetious in any way we had more of the ball and there was large sections of the game where I thought we dominated it. But not to come out with the result is disappointing.

“We dominated the game very early on. They got an early goal which we allowed them get as we didn’t man the runners, we let them get an easy goal. But for the first 15 minutes there was only one person who had the ball which was us. Yeah on our shot selection we took our time to settle in the game.

“But from the actual dominating of the game I didn’t think we did. I thought we destroyed their kickout and made them go short in every single kickout because we won every single time they went long. It is a ploy we have had all year. We just didn’t convert enough of the ball we turned over.”

Leahy said it was hard to see his side undone by a number of silly mistakes, that they had worked hard to counteract during the year, having also done so many things right over the 60 minutes yesterday also.

“We knew they were defensive, that they dropped off. We counter-acted that by trying to put runners into the areas and trying to work the inside forwards. We got our opportunities but our shot selection in the end was very, very poor.”

“There’s no pride in a loss too be honest with you, there’s pride in these people. In my opinion, what they have been through and what they have done is amazing and they have grown and they are just superb people.

“We have gone across so much disrespect over the last two weeks. That’s what I would be annoyed about more, and maybe that’s because people think we shouldn’t be there, or we shouldn’t be making progress, but you still have to respect every team that is going forward.”

An afternoon with the alleycats